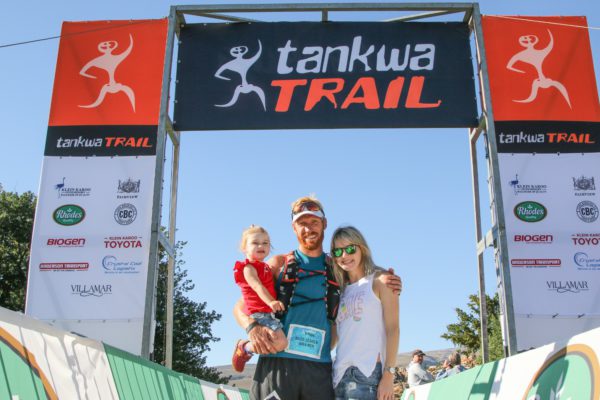 AJ Calitz poses with his daughter, Emilie, and wife, Paulette, after winning the 2017 Tankwa Trail. Photo by Oakpics.com.

AJ Calitz completed a clean sweep of the 2017 Tankwa Trail’s stages with victory on stage three on Sunday. Alana Jane Munnik meanwhile finished second on the stage, but did more than enough to seal the women’s title; which she all-but won when she beat Yolande de Villiers by fifty four minutes on Saturday’s second stage.

The twenty three kilometre final stage featured some of the Tankwa Trail’s best singletrack; twisting through wind weathered sandstone rock formations, climbing steep koppies and seeking out sections of slick-rock slabs where the trail cuts through the lichen virtually negating the need for route markers. The Koue Bokkeveld weather also played along, to provide a fitting end to the race, for the third stage and the runners enjoyed the mildest day of the 2017 event.

Jonathan van Wyk, who had been in third place on the solo men’s general classification standings overnight, set the early pace and led the field through the first five kilometres. But once Calitz, Endi Angelo Pegado and the leading men’s team of J.C. Visser and Mauritz Jansen van Rensburg upped their pace and moved to the front of the field van Wyk began to drop back. Heading into the first climb of the day only Visser and Jansen van Rensburg could maintain Calitz’s pace. The climb, though relatively short at just four hundred meters long, was exceptionally steep and reduced all but the leading runners to a weary trudge. 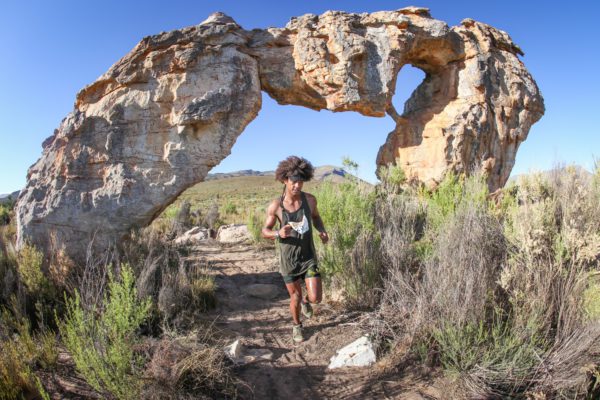 One of the characters of the race was Endi Angelo Pegado, running his first ever trail run and finishing second behind only AJ Calitz. Photo by Oakpics.com.

Calitz, as he had done all weekend, kept a steady pace which none of the other trail runners were able to comfortably match and soon established a comfortable lead. His lead was made more secure by the struggles of Angelo Pegado and van Wyk who were clearly feeling the effects of the previous two days on their legs. The race leader eventually ran home the winner for a third stage in a row, in a time of one hour, thirty nine minutes and sixteen seconds, completing his perfect showing at the Tankwa Trail.

Reflecting on the three days Calitz said: “Amazing, just culminating in a beautiful day on some new tracks I haven’t run before, which is fabulous.” Jokingly he added: “I’ve actually got a bit of post-race depression already. Tomorrow is back to the grind and training, so this is as good as it gets.”

One runner who is probably keen on returning home from her Koue Bokkeveld adventures is stage three solo women’s category winner de Villiers. She managed to pip the women’s champion, Munnik, to the line for the second time in three stages; but her disastrous day on Saturday meant she would return to Oudtshoorn with another second position overall. Adding to the second she claimed on her mountain bike, alongside Mariske Strauss, in the Momentum Health Tankwa Trek, presented by Biogen last weekend. 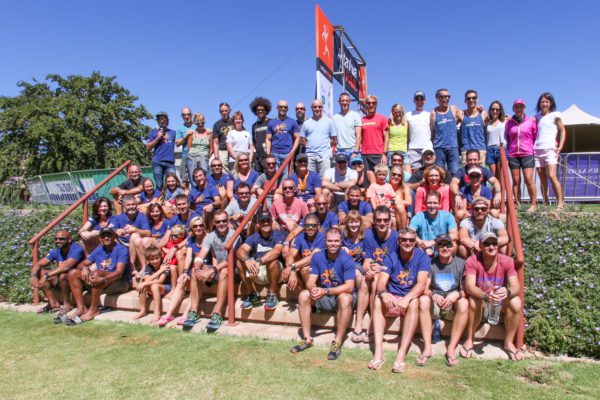 The exclusive field of trail runners assembled before lunch and prize giving on Sunday morning for a 2017 Tankwa Trail group photo. Photo by Oakpics.com.

Munnik’s consistency across the three days paid off as she claimed the Tankwa Trail title. Though predominantly an ultra-trail runner, Munnik enjoyed the challenge of the relatively short, in her terms at least, stages. “I really tried to push the pace today and keep up with Yolande. It was nice to challenge myself to run faster than I usually would” she concluded.

In the mixed category there was no surprise as Landie and Christiaan Greyling completed their clean sweep of Tankwa Trek stages, while Jana Trojan and Tracy Forbes, and Visser and Jansen van Rensburg did the same in the women’s and men’s team categories respectively. The only significant general classification changes came in the solo women’s and men’s team categories. Erika Fourie usurped Therese Hansson’s third place in the solo women’s standings while the Click Foundation’s Adriaan Louw Heyns and Riaan Potgieter relegated Rob Williamson and Jakob Volmoer to third place in the men’s team category.

For 2018 Dryland Event Management have big plans for the Tankwa Trail; having consulted with runners like Landie and Christiaan Greyling and AJ Calitz. Next year will see trail runners take on the infamous Merino Monster climb for the first time, a move which will necessitate a stage reshuffle. The proposed route will then include the Witzenberg Valley as stage one, the Merino Monster as stage two, and with the scintillating Koue Bokkeveld singletracks of stage three remaining largely as seen for the 2017 edition. With these changes afoot the best way to stay updated with the news from the Tankwa Trail is to follow @TankwaTrail on Twitter; and like the Tankwa Trail Facebook page, where you’ll also be able to view all the photos and daily highlights videos from the 2017 Tankwa Trail. And diarise 15 to 18 February 2018 to experience the warm heart of the Koue Bokkeveld first hand.

For the full results from the 2017 Tankwa Trail click here.