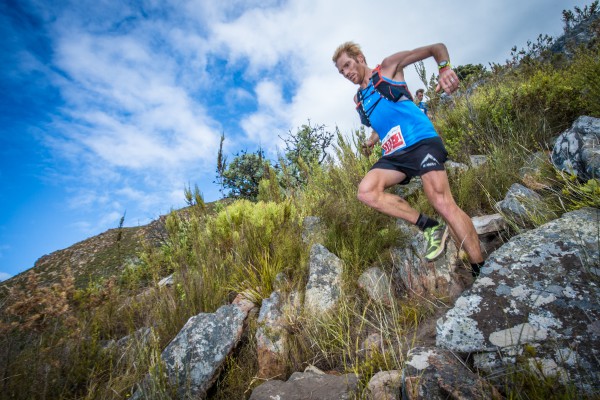 AJ Calitz Making the most of gravity to clinch the overall title with partner Ben Brimble.

The 2016 Cell C AfricanX Trailrun presented by ASICS closed off on a high note at the majestic Houw Hoek Inn on Sunday, 13 March 2016.  Team KWay North Face’s AJ Calitz and Ben Brimble obliterated the men’s field, claiming a stage three victory in a blistering fast time of 01:52:30 and the overall victory in a well-deserved combined time of 07:12:34.

Stage Three consisted of a 22km route that featured an 800m ascent.  With a focus on enjoyment, the first half of the route featured easy running single track with open road links leading to the hiking trail next to Kat Pass.  All major climbs were on the second half of the stage.

“Stage Three was lovely, but tough,” says Brimble.  “There was a nice combination of single and jeep track.  The shorter distance also made it more manageable, but starting with tired legs meant that it hurt from the start.  We ran with Edwin Sesipi and Givemore Mudzinganayama until the 12km mark, but then they started taking strain.  AJ and I made a break at the 14km mark.  We kept pushing, building on the gap while enjoying the run.   It was amazing to run with AJ.  He’s so strong on the hills, I literally just tucked in behind him.  On the flats I was a bit faster though.  Our running styles complement each other well.  AfricanX is an amazing race, definitely the best three day stage race out there.   Where trail running can become quite a lonely sport, the AfricanX allows you to run with a partner.  I’d definitely like to be back next year.”  Johardt van Heerden and Henno Havenga of Team Windhoek Light Pro’s claimed the second spot on the podium after three days of racing, while Johnny Young and Nicholas Rupanga of Team ASICS Vets finished third.

Team KPMG Salomon Ladies’ Megan Mackenzie and Landie Greyling secured their hat-trick stage victory in an impressive time of 02:11:39, and an overall victory in a combined time of 08:28:47.  “Our goal was just to maintain our lead, while enjoying the run, the scenery, the down hills and the lovely mountain bike trails,” says Greyling.  “There was such a great vibe out on route.  We just can’t help but come back to AfricanX.  It’s a nice race with such a great atmosphere.”  Taryn King and Dunya Ansems of Team Takkie and Heels claimed the second spot on the podium after three days of racing, while Katya Soggot and Chantel Nienaber of Team The Ladybirds finished third.

Dawid Visser and Leilani Scheffer of Team ASICS Beat The Sun snatched the top spot on the podium after completing the three stages of the Cell C AfricanX Trailrun in a combined time of 08:29:33.  “Stage Three started out fast with Tranquil and Maphuti setting the pace,” says Scheffer.  “We ran with Landie and Megan, but later picked up the pace.   The last part of the route caught us by surprise, but we ran well.  Claiming the overall title is an awesome experience.  We are truly grateful.”  Tranquil Gumbo and Maphuti Phaka of Team My Road Less Travelled claimed the second spot on the podium after three days of racing, while Grant Marcus and Kate Mapham of Team Shesha finished third.