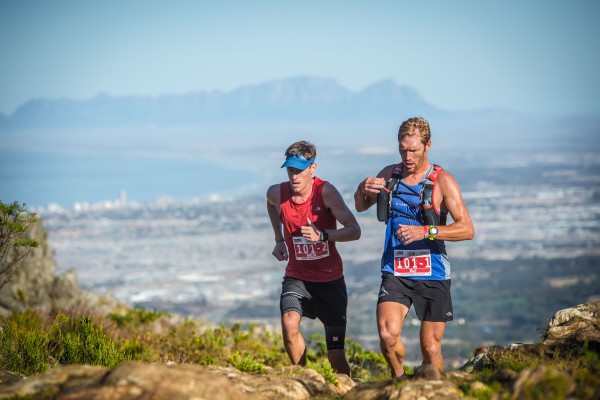 AJ Calitz and Ben Brimble attacking on day 2 to take the win.

With the aftermath of Stage One’s racing in their legs and the daunting reputation of stage two looming, entrants travelled by bus to the picturesque Ongegund in Somerset West on Saturday, 12 March 2016 for the start of a tougher Stage Two of the Cell C AfricanX Trailrun presented by ASICS.

Teams of two (male/female/mixed) had to complete a 34km route that featured a 1100m ascent before witnessing the welcoming site of the finish line at the acclaimed Paul Cluver Amphitheatre in Elgin, Grabouw.

Reigning men’s team champion, AJ Calitz together with Ben Brimble of Team KWay North Face obliterated the 34km route in an impressive time of 02:45:51.  “Today went exactly according to plan.  It was textbook stuff,” says a delighted Calitz.  “We went out hard up the first climb at Gantouw Pass, just to check the legs and gage where the other teams where at.  From there we shared the workload with Johardt Van Heerden and Henno Havenga, pushing hard as we didn’t want the roadies to have fresh legs for the climbs.  It was at the second climb at Applegarth that Henno started to take strain, that’s when I told Ben that it was time for us to go.  We took the lead and managed to maintain a good pace.”

“If anybody heard us out on route today they’d think that we had a bro-mance going,” laughs Calitz.  “We were constantly encouraging each other.  This was the hardest that I’ve ever had to work for a win.  I think people wrote us off after Stage One, so it is really nice to be able to show everyone that the old ballies still have what it takes.  Going into Stage Three we’ll play a defensive game.  We’ll just sit back and play to our strength.”  Johardt Van Heerden and Henno Havenga of Team Windhoek Light Pro’s came in second, while JC Visser and Rohan Kennedy of Team ASICS Run Tough finished third.

Megan Mackenzie and Landie Greyling of Team KPMG Salomon Ladies continued their winning streak, crossing the finish line first in a time of 03:17:30.  “The stage was awesome,” says Mackenzie.  “It was really hot out there.  We just ran within ourselves.  I love AfricanX.  I think this is my third one.  I can’t imagine not coming back to race.  Tomorrow we’ll see how we feel, give it a good shot and hopefully blow it out the water.”  Taryn King and Dunya Ansems of Team Takkie and Heels came in second, while Katya Soggot and Chantel Nienaber of Team The Ladybirds finished third.

Leilani Scheffer and Dawid Visser of Team ASICS Beat The Sun’s finishing time of 03:18:18 secured them the top spot on the podium in the mixed team category.  “The Stage Two route was very nice, but I think everybody was feeling dead after yesterday’s stage,” says Scheffer.  “The AfricanX is perfectly organised, the routes are well marked and the water points are great.  Taking the stage victory was a very nice surprise.  Taking the overall victory tomorrow would be even better.  It would really mean a lot to us, especially to Dawid as it’s his first race back since his injury and AfricanX is really special to him.  It would be great to share that experience with him.”  Tranquil Gumbo and Maphuti Phaka of Team My Road Less Travelled came in second, while Laura Peddle and Iain Peddle of Team Salomon Fishing in the Yemen finished third.