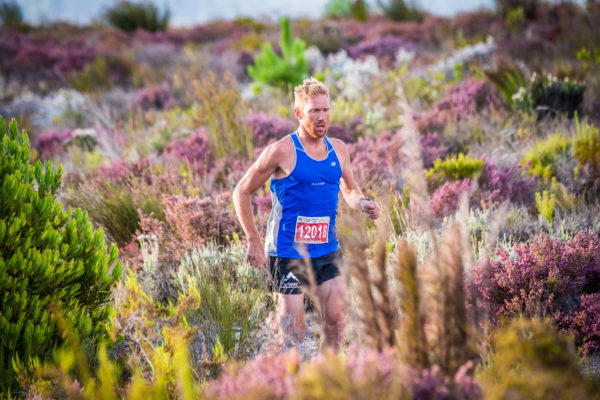 According to Calitz, the XTERRA Trail Run is good training for the AfricanX Trailrun. “I had a testing year last year, so I am happy to bounce back. The XTERRA Trail Run was a lot of fun and featured a beautiful route. The conditions today were difficult though. The route was muddy and slippery and for some strange reason we run against the wind going out and coming back in. I am happy to be on the top step of the podium again.” Mohale Mokotla came in second, Francois Burger finished third.

Van Niekerk set the course on fire in the women’s race. “I’m not a triathlete, so I decided to enter the trail run instead. I was hoping to win, but didn’t know who the competition was. The event was very nice. This is the first time that I run through a banner when crossing the finish line.” Chantel Nienaber came in second, Daneil Feldmann finished third.

Eduan Burger crossed the finish line first in men’s 6km XTERRA Trail Run. “I’ve been recovering from injury. The XTERRA Trail Run is my comeback run. The route was beautiful and featured a lot of single track and a river crossing. The atmosphere was fantastic.” Burger crossed the finish line in 29 minutes 17 seconds. Josh Messina came in second, Mitch Ferreira finished third.

All the way from Germany, Christine Schleifer claimed gold in the women’s 6km XTERRA Trail Run. “My husband was going to take part in XTERRA, so I decided to do the trail run. Sadly he could no longer participate due to injury. The event was awesome, featuring rolling hills and a beautiful landscape.” Schleifer crossed the finish line in 29 minutes 38 seconds. Linel Engelbrecht came in second, while Stephanie Derr finished third.