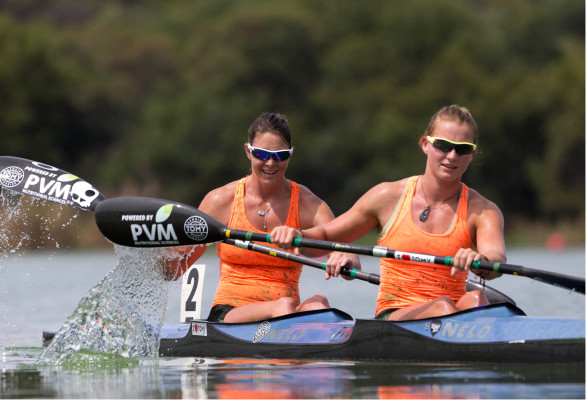 Durban – Canoeing South Africa has announced a big squad of paddlers set to represent the country at the all-important 2015 ICF Canoe Sprint and Paracanoe World Championships in Milan, Italy from 19-23 August as well as the group of emerging talent to compete at this year’s ICF Junior and Under-23 Canoe Sprint World Championships in Montemor-o-Velho, Portugal from 23-26 July.

The Pretoria based K2 combination of Esti van Tonder and Tiffany Kruger are readying themselves for their women’s 200m and 500m clashes in Milan after Van Tonder’s recent shoulder injury significantly hampered the pair’s build up to the recent national trials.

“Milan’s World Champs are all about qualifying for Rio 2016!” confirmed Kruger.

“Esti (Van Tonder) being out of the boat three weeks before the SA trial wasn’t ideal but thanks to PVM Nutritional Sciences and SSL Gym – who were a huge help with her rehab, gym work and training periodization – she’s now back and we’re doing everything we can to give Worlds our best shot.

“Everything is back on track nicely for us now and I believe that by the time we get to Worlds we’ll be the best prepared we can be as we look to finish at least within the top six of the B final in order to qualify for Rio,” she added.

A strong showing at this year’s World Champs is also a must for Van Tonder while the Under-23 star is also buoyed by the sizeable squads named by Canoeing South Africa for both global events.

“Personally I don’t want anything less than a top three in the B final at Worlds this year so that we make sure we meet all of the ICF, SASCOC and CSA’s qualification criteria however we’ll definitely still be going out there to qualify for an A final!” confirmed the Academy for Canoe Development member.

“Tif (Kruger) and I have definitely started seeing a huge difference from the work that we’ve been doing to sort out all the small uncomfortabilities that we discovered at the World Cup earlier this year and that really has been a big improvement for us that I’m sure will make a big difference at Worlds too.

“This is the first year that South Africa is sending such big squads to both World Champs; sending some Under-23s to the senior World Champs is also great and I’m sure quite a few of the Under-23s will really turn heads!” she added.

While Chrisjan Coetzee and Louis Hattingh do business in their senior men’s kayak events, much attention will be on Phillemon Mahema, Hosea Seleka and Cornelie Lemmer in their respective canoe tussles.

“It is hugely exciting to see our paddlers representing the country in ‘C’ paddling once again!” says team manager Craig Mustard.

“Our ‘C’ paddlers are currently hard at work at a training camp in Hungary and I’m sure this will really help them raise the bar and set new personal bests come this year’s Worlds – their first ever international event!”

For Hogg, Wing and Paull, the Italian trip represents the taking of a major stride in their international careers and – like Hartley and co. – represents another vital step in their journey towards qualifying for the Rio 2016 spectacle.

“It is very positive for the sport of canoe sprints in South Africa for us to be sending such a big team to the World Champs this year,” says Mustard.

“For our seniors, it is all about qualifying for next year’s Olympics while our paracanoeists have also done extremely well recently and hopefully another strong performance and personal best times from them in Milan will see them a part of the South African Paralympic team for Rio 2016 as well!”

While eager to impress at a senior level in Milan in August, the likes of Van Tonder, Louis Hattingh and Lemmer will first have their U23 assignment to contend with while for Dewald Hattingh, Bryan Leroux and Stuart Bristow will focus solely on July’s age group contest.

A seven-strong junior contingent will join their Under-23 fellow nationals in Montemor-o-Velho in July where the young flyers will look to test themselves against some of the best junior talent the globe has to offer.

“Those chosen for the Under-18 and Under-23 teams are paddlers that we believe have the potential of at least qualifying for a B final or, if all goes well, even an A final!

“While we wish all our seniors the very best in their quest for 2016 Olympic qualification at this year’s Worlds, the depth that we are starting to see coming through the junior ranks suggests we have a bright and even stronger future in sprint paddling ahead of us come the 2020 and 2024 Olympic Games!” added Mustard.

The women’s K4 of Hayley Arthur, Kerry Segal, Melanie van Niekerk and Brittany Petersen as well as Under-23 youngsters Gabriel van Wyk, Lolo Fick, Calven Clack were also selected for the seniors contest and Under-18 talents Luke Criticos and Jarryd Gibson the Junior and U23 clash however will not travel to Italy and Portugal respectively.