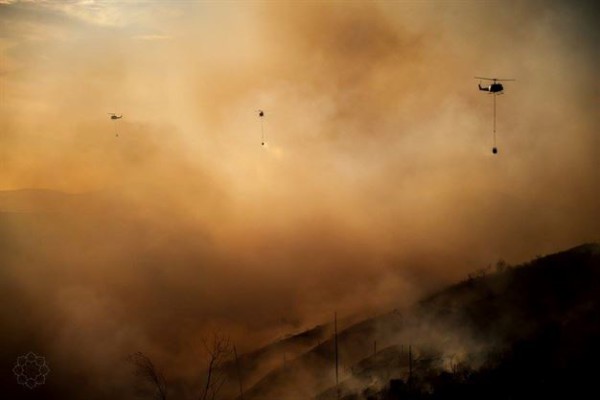 (Cape Town, 4 March 2015) It’s been an extremely worrying and tense week for Cape Town.  For the last four days our beautiful Southern Peninsula, that the iconic Cape Town Cycle Tour traditionally passes through, has been on fire. It’s been devastating.

Fire fighters have worked day and night battling the flames in sweltering heat as experienced pilots fly choppers to drop buckets of water on the flames.  Emergency teams, paramedics, health officials and disaster experts have gone the extra mile, saving lives and preventing homes from burning down.

It’s been very heartening to see how the public has responded to the crisis. They have rushed to bring necessities – eye drops, ice, drinks, food for the fire fighters. They have also pledged donations to buy much-needed resources. They have given much more than money – they have opened their hearts and given their humanity. Cape Town is a city of Good Samaritans – a city of heroes.

This week we’ve seen people from all walks of life responding to the fires and we know that people of this great province don’t only come together for good times but also come together when there is a crisis and we share the concerns of the local community and join in rallying behind these brave firefighters.

For the Cycle Tour to be able to safely cater for the 35000 anticipated participants, we need to start placing infrastructure on the ground by tomorrow morning.  For this to happen, a decision on the route needs to be made today.  The decision we have made is unanimous and has not been taken lightly.  It has involved extensive discussion and collaboration by all stakeholders including the Provincial Government of the Western Cape, Enteleni and their consulting engineers in respect of Chapman’s Peak, City of Cape town Events Office, City of Cape Town Disaster Management Services, Provincial Emergency Medical Services and Cape Town Traffic in respect of Ou Kaapse Weg, MyCiti, Mediclinic and our Presenting Rights sponsors.

Having carefully assessed all available information, it has become clear that the safety of cyclists cannot be guaranteed on Chapman’s Peak and this rules out using this famous landmark for the 2015 event. This is largely as a result of the extensive fire which has destroyed vegetation responsible for retaining the mountainside above Chapman’s Peak.  Furthermore, the heat has caused rocks to expand making them unstable and in some instances rock falls have occurred.

With Chapman’s Peak ruled out, our detour option of Ou Kaapse Weg returning to Cape Town via the M3 was considered.  A number of key issues needed to be taken into account including access and egress to the South Peninsula by Emergency Services vehicles and local residents who are still under threat of fires raging in the area.  The soot and ash covering both sides of the road on Ou Kaapse Weg present a considerable health risk to participants and this would be exacerbated by the likelihood of wind.

The idea of an out and back route via Main Road to Cape Point and back is impractical for an event of this size as road widths in certain areas between Fishhoek and Muizenberg narrow down to a width of four metres.

We understand that many visitors have travelled from far afield to participate in this iconic international bucket list cycling event.  We are also keenly aware of the need to reduce the impact the event will have on traffic and other emergency services that are desperately needed elsewhere in the South Peninsula.

With this in mind, we have taken a bold decision and will be staging a vastly shortened version of our beloved Cape Town Cycle Tour in solidarity and support for those affected by the tragic fires burning on the mountains around Cape Town. The route will be a 47km circular route from its normal start at the Civic Centre to the end of the M3 and back the same way to a slightly altered finish in Green Point.

The unfortunate set of circumstances we face this week is unprecedented in 38 years of the Cape Town Cycle Tour.  On Sunday cyclists won’t see pristine scenery as they make their way down the shortened route. They should see the smouldering landscape as a source of inspiration and pride because it represents the heroism of the men and women who have – very literally – put their bodies in the line of fire.

The ride remains a celebration of Cape Town and this wonderful Peninsula on the southern tip of Africa. The Cape Town Cycle Tour will go on because, as the fighting spirit of the people of Cape Town has demonstrated, nothing can take it away from us – not even fire.