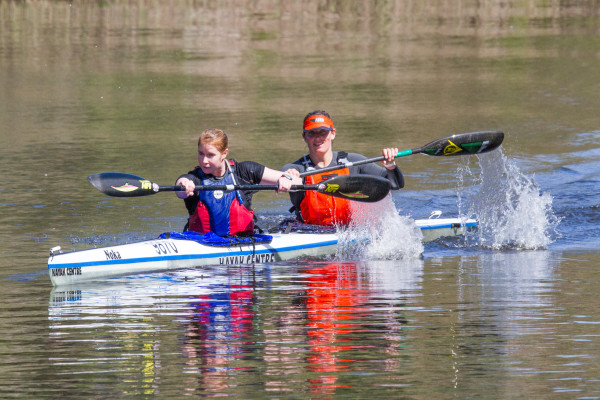 After winning their second successive Breede title on the weekend, the crew of Alex Adie and Nikki Mocké are aiming to be contenders for the Hansa Fish Canoe Marathon women’s title.. Supplied/
Gameplan Media

The Adie-Mocké axis has become a benchmark in women’s paddling in the Western Cape, particularly since Adie moved from her native Pietermaritzburg to Tokai, and they proved in the tough, low river conditions on the Breede that they are a force to be reckoned with.

“It’s one of those combinations that just clicks,” said Adie, the twin sister of Berg champ Abby Adie-Solms. “Nikki is such a great person and a good friend that it makes racing together a pleasure.

“We combine well together, and even though we had a bit of a lean on the weekend, we will sort that out before the Fish, which we are both really looking forward to,” said Adie.

“Nikki has full confidence in me driving the boat, which is one of the reasons why we go so well together and enjoy our racing,” she added.

Mocké was part of the South African women’s K4 that excelled at the Beijing Olympics, before returning home to focus her energies on raising a family with surfski icon Dawid Mocké and running their paddling business.

While her growing family may have kept her away from the paddling limelight, she showed at the recent Mauritius Classic surfski race that she is back to her best, making her Hansa Fish challenge with Adie one to be taken seriously.

Adie has had a few serious challenges at the Hansa Fish, but has never managed to make the podium.

“The year I raced with Kelly Howe we were going really well in third until we broke our rudder,” she muses.

“Guaranteed we will give it our best shot,” she added. “We know that it will be a tough race. It always is because the Fish always attracts the best paddlers in the country and it is SA K2 Champs as well this year.”

Adie says they have a plan in place to build on their fitness to ensure they are in contact with what is expected to be a highly competitive field of women’s K2s.

Her twin sister is rumoured to have lured Czech Republic star Anna Adamova as a partner and a number of the women’s crews from the SA Marathon Championships team doing duty in Hungary are also believed to be entering.

“We have such a great training set-up here with the Orka Squad, so we will use whatever time we have to get into shape for the race,” said Adie.

She was at pains to point out that they will go into the race with a pre-decided strategy that will avoid the risk of shooting the notorious Keith’s Flyover rapid ten kilometres into the race.

“We have already discussed that! No, we won’t be shooting Keith’s!” she said firmly.