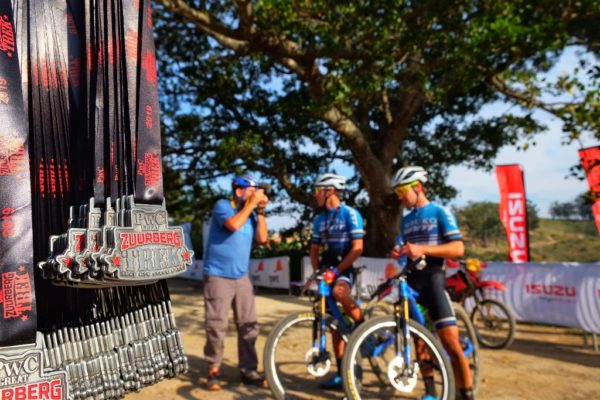 Two former Springbok rugby captains were among the 250 riders who took on the 2019 PwC Great Zuurberg Trek, from the 24thto the 26thof May. The three day mountain bike stage race was held in the Zuurberg Mountains in the Addo region of the Eastern Cape and boasted a blend of serious racing as well as relaxed riding. At the sharp end of the field the race honours went to the Imbuko Giant team. While further back the aim of the ride was taking in the spectacular scenery and enjoying the camaraderie.

Corné Krige, who captained the men in green and gold 18 times between 2002 and 2003, was joined at the race by the nation’s most successful skipper John Smit. The former hooker captained the Boks in 64 of his 111 test matches. Riding for fun the pair did not have to motivate their fellow riders to provide noteworthy performances, but they did have to dig deep themselves. The rugged terrain of the PwC Great Zuurberg Trek ensured they had to tap into their old reserves of toughness.

“It’s tough, it’s not an easy race” Krige advised, gulping down a First Choice High Protein Recovery Drink. “But it is unbelievable, the singletrack is amazing and the whole route is beautiful” he said making up for his initial warning. Adding his voice to that of his national captaincy predecessor Smit praised: “It is one of the best three day stage races I’ve done. I’ll definitely come back.”

The rugby captains were joined at the race by two noteworthy captains of the mountain biking peloton, Kevin Evans and Robyn de Groot. “Those were some awesome trails” Evans grinned impishly. “There’s a farmer in the Umko who must watch his back. There are sublime routes here and, ja, I’m going to bring a whole crew next year. The trails are fantastic and the organisation is brilliant. Hats off to the PwC Great Zuurberg Trek.”

De Groot, like Evans has found joy in simply riding her bike recently. As she has regained strength she has looked to test her legs again though. “I’m happy with how things are going” the South African marathon champion recounted after the final stage. De Groot, who finished just behind the third placed men’s team on all three stages, is making her comeback after an iliac artery surgery in January. She won the KAP sani2c alongside Samantha Saunders the weekend before so her PwC Great Zuurberg Trek performance is not just a standalone result either. The heartening result and performance was not the only highlight of the event for De Groot though. “What a fantastic weekend to come spend out here for us mountain bikers and I hope to be back next year” she smiled.

Looking ahead to the 2020 PwC Great Zuurberg Trek the dates and entry packages have already been finalized. Next year’s race will take place from 29 to 31 May and general entries open on 10 June this year. 2019 riders will have a two week head start on the general public, as entries open for them on 27 May already.

“We do cater for the racer, but I think the PwC Great Zuurberg Trek has more to offer than just racing” event co-owner Siska van der Bijl revealed. “It’s about meeting new people in the small field, making new friends and enjoying the adventure. The landscape and trails are so diverse; we try to match that with the post-stage treats for the riders. The type of riders we believe should enter the race are those who have ticked the box of sleeping in a tent on a mattress on the ground at a stage race and are now looking for something more luxurious. The Eastern Cape has more to offer than most people realise and we try to always showcase the province, its people and the landscape at its best.”

Riders wishing to take part in the 2020 PwC Great Zuurberg Trek should be warned to commit sooner rather than later. The 2019 entries sold out within a month and due to the remote race village entries are limited to just 250 riders. For more information on the event, the area and what to expect in May next year visit: www.greatzuurbergtrek.co.za.