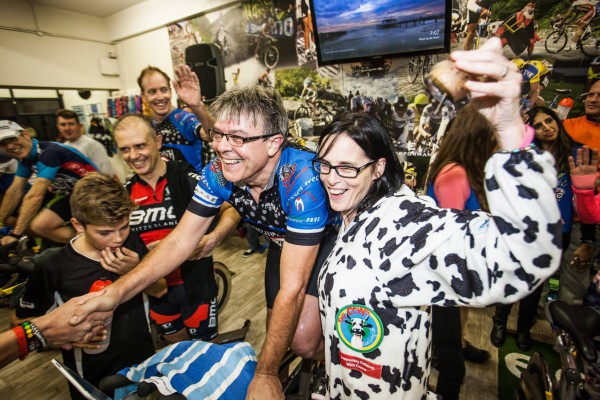 KWAZULU-NATAL, PIETERMARITZBURG, 10 June 2016 – The Cascades Lifestyle Centre is pulling out all the stops for well-known NPO ‘The COWS’ as its Pietermaritzburg’s venue to hold the 2016 ‘100 Miles of Nowhere’ annual cyclethon to raise funds for their CHOC Childhood Cancer Foundation, happening on 24th of June 2016.

Says Lynda Lees, Consultant to Cascades Lifestyle Centre, “Cascades Lifestyle Centre is very happy to support this important COWS initiative for the CHOC foundation. We encourage Martizburg residents and cyclists to come out in full force to the centre on the 24th June from 2pm to support this international challenge. Many of our retailers are supporting this initiative.”

This year, the cyclethon of 100 miles (160km) aims to raise R250 000 for CHOC Childhood Cancer Foundation, and is open to everyone. The distance can be completed as a team of one cyclist, two or four cyclists. However the team is made up, the distance must be completed on the Cadence Performance Centre stationary bikes.

Says Tessa Hesse, Manager of the Pietermaritzburg Cadence Performance Centre, “The 100 Miles of Nowhere Challenge is a great event that we’re proud to be supporting. We will be transporting 20 of our new stationary bikes and equipment to the Cascades Centre ready for set up and cycling. It’s a fun, family-orientated event that the whole community gets behind, and we want to thank the Cascades Centre for hosting the event.”

The 100 Miles of Nowhere concept is now an international fundraising initiative that was unintentionally started by Eldon Nelson, an American blogger who owns the www.fatcyclist.com blog.

The cyclethon will be hosted at eight Cadence Performance Centres based in Pietermaritzburg, Durban, Johannesburg and Cape Town, and all centres will run the cyclethon simultaneously on 24 June from 2pm – 7 pm.