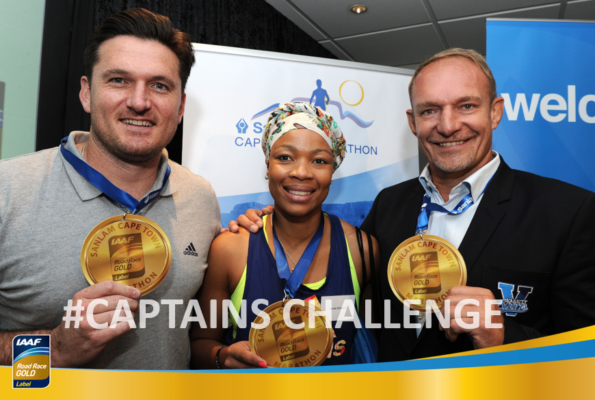 Having received the prestigious Gold Label recognition from the International Association of Athletics Federations (IAAF), The Sanlam Cape Town Marathon is the most prestigious “must run” marathon on the African continent.

Broadening the race’s existing campaigns for runners to ‘Challenge Yourself’ and ‘Challenge your Friend’, the recently released Challenge your Captain provides the opportunity for leaders in every sphere of South African life to use the network to run and in doing so raise awareness for a healthy lifestyle whilst raising money for charity.

Janet Welham, Race Director commented, “Challenge your Captain” is about encouraging not only participation, but most importantly participation for a cause. The key focus of The Sanlam Cape Town Marathon is to leverage change. What better way to realise this goal than by having leaders across South Africa’s various sporting codes, business, politics, arts, culture and society accept the challenge. Through their unselfish actions, these individuals motivate and inspire all of us.”

Former Springbok rugby captain Francois Pienaar launched the initiative challenging former Proteas cricket captain Graeme Smith to run with him. They will be running the 42.2km to raise funds for the MAD Foundation.

“The Sanlam Cape Town Marathon promotes health and wellness. Participation in an endurance event is one way in which people are able to transform their lifestyles. I call on ALL CAPTAINS OF INDUSTRY to join me and lead by example” says Pienaar, if a rugby forward can do it, then no one has an excuse.

“Having run many marathons, I know how deeply personal and fulfilling the experience is. Particularly when one commits to helping others less fortunate than oneself. In essence this added responsibility drive you forward so as not to disappoint them. Running changes lives, it can change yours too” says van Zyl-Meyer, a former Olympic medallist and multiple world record holder.

So, be the agent for the change you want to see in this incredible country, be an AfriCan, make a difference to those who most need it, CHALLENGE YOURSELF, CHALLEGE A FRIEND OR CHALLENGE

YOUR BOSS/CAPTAIN/LEADER to join you on this remarkable journey by going to www.capetownmarathon.com and register to run, #itscapetownmustrunit.

Entries for the Sanlam Cape Town Marathon are open. To find out more, go to www.sanlamcapetownmarathon.com