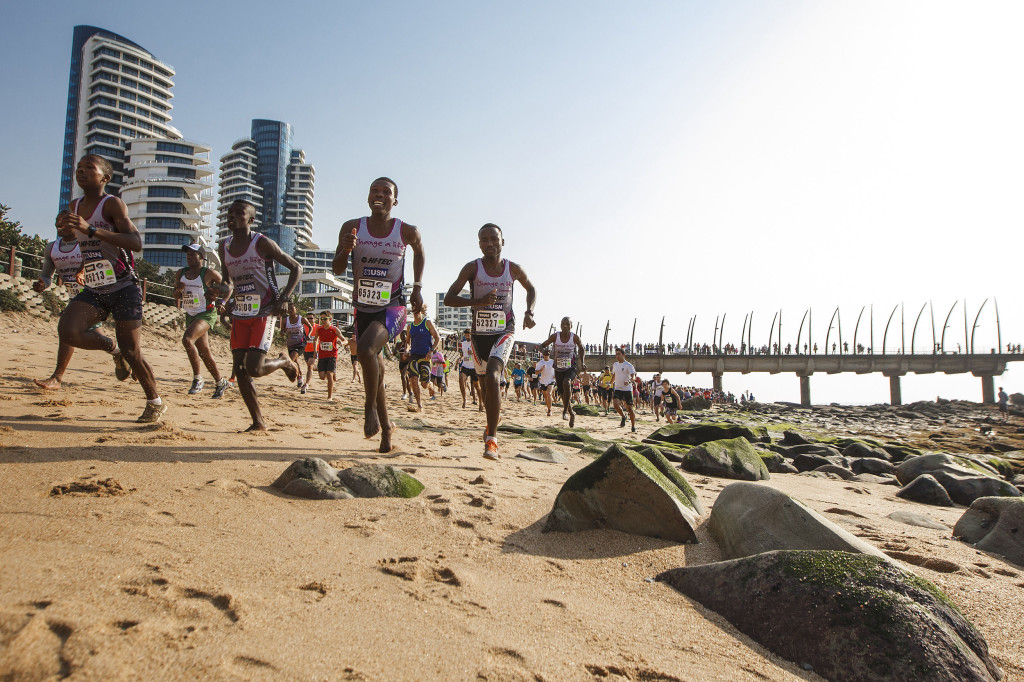 Durban – The running arm of Martin Dreyer’s Computershare Change A Life Academy made a big impression at the recent 14km The Sandy beach run, presented by Thule, along the sand from Umhlanga to Suncoast as ten runners clinched top 20 places.
‎
John Ntuli, who also coaches the RMB Change A Life Academy mountain bike team, stunned the race by finishing second while young team mate Sanele Maphumelo was right on his heels in third.

The race was A special one for many of the team as it was the first running event they’d taken part in outside of the Valley of a Thousand Hills while, for a few, it was also a first ever glimpse of the ocean.

“With the Change a Life runners still very much novices when it comes to taking part in the local racing scene, the buzz of excitement at the start of The Sandy made the already present ‘butterflies’ in our runners’ stomachs do flick flacks!” described Dreyer.

“Some of our Change a Life Zulus hadn’t ever seen the ocean before so what an experience running along the beach for 14km was for them, let alone for us to end up having all ten of our team members finish inside the top 20!

“They loved the experience, especially running on the floating bridge across Blue Lagoon, and I’m extremely proud of their efforts!” he added.

Started as a canoeing programme built on Dreyer’s sublime paddling career in which he won both the iconic Dusi and Non Stop Dusi Canoe Marathons seven times respectively, the Change a Life operation has since branched out into running and mountain biking.

“We got the running side of things underway about four years ago and it has been a fascinating journey from then until now,” said Dreyer.

“Initially we identified nine schools in and around Nagle Dam and ,once we had the buy-in from the headmasters, we started mapping out courses on which we could host a weekly cross country race at each school.

“Our paddlers were the coordinators of the weekly races at the various schools and they would record the times of the top 50 finishers each week and so we started to identify talent at each school.

“At the end of each term we then hosted an inter-schools cross country race where the top ten runners from each school came together and competed for the winners’ prize of a team meal at Spur, followed by a movie afterwards.”‎

The programme’s popularity saw its reach extended to 18 schools in 2013 which brought about a new set of challenges.

“With there being more schools last year it was quite tough to organize 18 separate races every single week so this year we decided to host four centrally located races each week that the school runners can attend.”

It is from this schools programme that Dreyer’s 10-strong Change a Life team was born.

“Kwanda Mhlophe, one of our original paddlers and a very strong runner himself, has now become our running coordinator and he ensures the guys organize the various schools races, gets the running team training, etc.

“Being between 16 and 20 years old, the team is still very young and very new to the racing scene. They’re developing with every race that they compete in though and hopefully in the not too distant future we can start seeing them compete in some of the bigger races.

“For now though the smaller weekend trail running events and colourful events such as The Sandy are helping them grow tremendously,” said Dreyer.