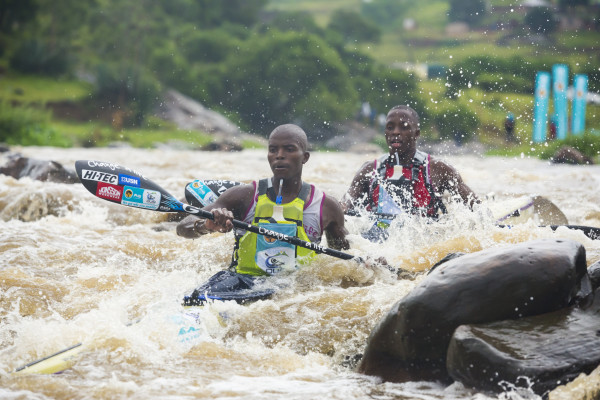 Pietermaritzburg – The 2016 FNB Dusi Canoe Marathon was another milestone event for Martin Dreyer’s Computershare Change a Life Academy as the Valley of a Thousand Hills setup enjoyed representation in no fewer than ten of the top 26 crews, including two gold medals and an age group title.

While each of the academy’s talented athletes will be well pleased with their achievements, it is the squad’s collective success that has brought Dreyer and his charges the most joy from this year’s FNB Dusi campaign.

“To have ten boats in the top 26 is unbelievable and to think we may well have had another two in that mix had two of our crews had a little more luck on day one and day two respectively is amazing!”

While top 15 hopefuls Thabani Msiya and Msawenkosi Mtolo together with Thomas Ngidi and Siboniso Shozi bowed out of the race due to issues at Mussons Rapid and Gauging Weir respectively, the rest of the squad claimed a remarkable results haul.

The academy’s most recent star Banetse Nkhoesa and academy ambassador Sbonelo Khwela charged to third place overall, this despite Nkhoesa being stabbed and suffering a punctured lung just eight weeks before the race, however it was Under-23 duo Mmeli Cele and Khumbulani Nzimande who produced the academy’s standout performance this year.

“Mmeli and Khumbulani’s gold medal is a massive 2016 Dusi highlight for us!” said Dreyer. “Khumbulani is a completely new talent and any time someone finishes in the top ten for the first time it is a very special occasion!”

“To see Mmeli and Khumbulani finish the first day in eighth place after a strong running effort was fantastic but then to see them maintain that sort of performance throughout the next two days, without falling back all that much, really was pleasing!”

Meanwhile, Sipho Canham – participating in just his third Dusi and with a previous best result of 49th in his K1 in 2015 – partnered Lucas Mthalane to fourteenth place. Junior Mpilo Zondi combined with Fish Hoek’s Mark Keeling, clinched the Under-18 Boys’ crown.

“It was great to see Mpilo – in his last year as a junior – winning the Under-18 title with Mark Keeling! They saw their 15 minute Day 1 lead disappear when they holed their boat on Gauging Weir on Day 2 but credit to them, they pulled the rabbit out the hat after putting in a massive effort on Day 3!”

“It was also great to see our juniors from last year, now in their first year of Under-23, carrying the momentum they built up from the 2015 Dusi into their new age group and doing so nicely!”

Despite having seen the programme grow exponentially since its humble beginnings eight years ago and the results speaking for themselves, Dreyer’s compliment of support staff remains somewhat modest.

“Although we have a small support team that runs around like crazy, to help our guys perform at the highest level, everyone has an exact role they play!” explained Dreyer.

“We’re all there for each other all the time and so these amazing Dusi results are testament to the effort of the entire Change a Life setup as a collective!

“A special thanks to my father-in-law and wingman, Paddy Bomford who adds such incredible value. From organizing logistics, buying post-race food for everyone, washing juice bottles and mixing USN for 24 paddlers – he does it all!

“Our RMB Change a Life mountain bikers also play a crucial role as they toil on day two and three, getting USN energy drink and water to all the paddlers where vehicles are not allowed to go.

“On day three they even cycle from their homes near Nagle Dam to Msinsi Resort at Inanda Dam, collect up to 40 litres of fluids each and make their way up to the top of Burma Road, ready to give it to the paddlers as they summit before then cycling all the way down to the finish at Blue Lagoon!”

“We are so fortunate to have Computershare facilitate the Change a Life Cycle Tour, where the money generated by it is used to fund our Change a Life Academy,” said Dreyer.

“It also pleases me to see Computershare CEO Stan Lorge taking the time to come down into the valley, get involved and witness the guys in action first-hand for the seventh consecutive year, that’s just amazing!”

The FNB Dusi season may now be over however there is still plenty on the cards for Dreyer’s charges during the remainder of the year, starting with the gruelling challenge of the Non-Stop Dusi Canoe Marathon that takes place on Friday, 4 March.