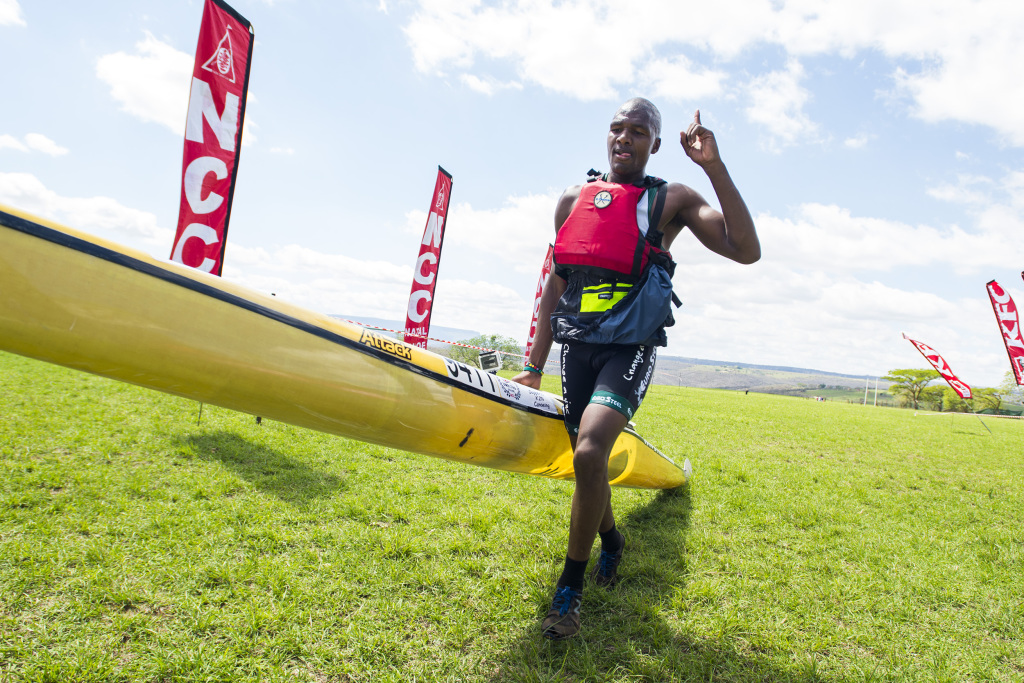 Umpetha Challenge winner Sbonelo Khwela (EuroSteel) will be hoping for a solid start across Albert Falls Dam and fast portage in order to be in the mix to claim a maiden K1 title in Sunday’s Ozzie Gladwin Canoe Marathon presented by Parklane SuperSpar. – Anthony Grote/ Gameplan Media

With four of the Gauteng’s premier river race’s top five positions occupied by Change a Life teams, the Valley of a Thousand Hills operation takes good momentum into this Sunday’s clash from Albert Falls Dam to Thornevale Farm.

“The Ozzie Gladwin is one of KZN’s biggest one day river races and it’s really the first race where all the top guys come out and race so it’s a really good season starter,” describes Dreyer.

“It’s a really well organized event, it enjoys a good turn out and there’s a bit of a portage included as well which our guys always get excited about,” he adds.

The current KZN river season is still in its infancy and little rainfall recently has resulted in low water levels for most of the province’s rivers, hence the Gauteng clash was an important base training exercise for Dreyer’s charges.

“The first few races of the KZN season are all quite short; only 20 to 25 kilometres long, so it was great to take the guys up to the Vaal and spend two back-to-back days on the river, getting the miles up.

“They were two good, hard training days and with both days being quite a grind, they became two honest days’ paddling,” says Dreyer.

Come Sunday, instead of being K2 partners, Vaal winners Sbonelo Khwela (EuroSteel) and Thulani Mbanjwa (Build it) will square off against one another as they both look to clinch a maiden K1 Ozzie Gladwin title.

On top of his Vaal victory, Khwela brings good confidence with him after his win at the recent Umpetha Challenge while Mbanjwa’s seventh at the Hansa Fish River Canoe Marathon a few weeks ago marked the beginning of the paddling icon’s re-emergence as a real Dusi title threat.

Together with Change a Life paddling coach Lucas Mthalane, Dam2Dam winners Banesti Nkhoesa and Mhlonishwa Hlongwane as well as steady performer Mmeli Cele, Khwela will look to fly the academy’s flag high at the front of the field however a renewed focus within the setup will also see a careful eye kept on the junior boys’ contest this Sunday.

“We have more of a focus on the juniors at Change a Life going into the 2015 Dusi and so we’re hoping for a good performance from all of our youngsters.

“It will be tough though because there will be lots of juniors from the Maritzburg schools all wanting to do well,” explains Dreyer.

While many may be looking forward to a calm start across Albert Falls to warm-up and prepare for the day’s portage and river challenges, Dreyer believes the pace of the opening flatwater stretch is frenetic at the front of the field and this sets the standard for the rest of the contest.

“The start is probably easy for the recreational paddler but a flatwater start is really tough for the front guys because the guys fly out the blocks and you have to make sure you get onto the front bunch if you’re going to be competitive later on,” says Dreyer.

“After the flatwater of the dam then it’s a really fast run down to the river before you hit the river where it then basically becomes a time trial down to the start!” he adds.