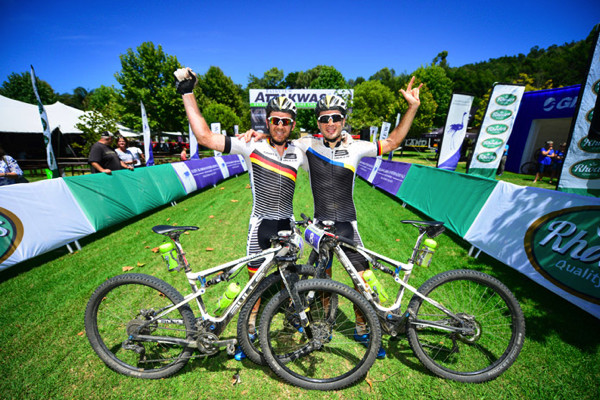 There was a changing of the guard at the 10th edition of the Fairview Attakwas Extreme Mountain Bike Challenge in South Africa’s Western Cape province on Saturday.

The German Team Bulls pair of Karl Platt and Tim Bohme decimated the field to claim a tie victory in the men’s race, while South African marathon champion, Robyn de Groot (Ascendis Health) secured the women’s title, ending the victory streak of Swiss five-time winner, Ariane Kleinhans (Team Spur).
The 121km race from Chandelier Game Lodge, Oudtshoorn to Pine Creek Resort, Groot Brak includes 2900 metres of vertical ascent. It also includes a section through the rugged Attakwas Reserve, an isolated wilderness area that’s seldom visited, but which has steep, rough surfaces. All of these elements combine to make the Attakwas Extreme Challenge one of the toughest one-day mountain bike races in South Africa.
Over 1000 mountain bikers tackled the difficult event with Platt and Bohme winning in a time of 4 hours 56 minutes 24 seconds and Alfred Thorpe, the 878th and final official finisher in a time of 10 hours 58 minutes 58 seconds, beating the 11-hour limit by just over a minute.
The men’s race saw an early split with seven riders moving clear off the front within the first 13km. This group comprised three Team Bulls riders – Platt, Bohme and fellow German, Simon Stiebjahn; former Attakwas winner, Matthys Beukes and his SCOTT LCB Factory Racing teammate, Gert Heyns and Attakwas rookie, James Reid (Team Spur), the current South African and African XCO champion and Timothy Hammond.
Beukes then put in a solo attack at 20km, but his aggressive tactic was soon nullified when shortly after the 30km mark, he punctured, forcing him to chase for the rest of the race to an eventual ninth place finish.
Hammond eventually relented and both Reid and Stiebjahn had mechanical trouble, but managed to rejoin the leaders after making quick repairs at the Tech Zone at Water Point 2. The five leaders then stayed together until the climb up to the King of the Mountain prime at 57km where Bohme and Platt opened a gap that would become the race-winning move.
The Team Bulls pair then worked well together for the second half of the race, eventually crossing the finish line together with a 20-minute gap over third placed finisher, Reid. Stiebjahn finished fourth and Heyns fifth.
“We decided to ride a steady race from the start today. Tim and I live quite close to each other in Germany and we have done a lot of training together since the start of November. We watched our power and heart rate readings today and kept them virtually the same from the start to the finish. This meant a slightly faster start than normal, but it worked well in the end,” said Platt.
“By having two of us in the front made it easier because of the headwind in the last 40km. We were sharing the work into the wind. It must have been tough for the guys behind us riding alone,” added the German marathon champion and four-time Cape Epic winner.

“We were also super hungry to race today. We have been training since the beginning of November! The plan is to race Tankwa Trek stage race and the Sabie Ultra-marathon in South Africa as part of our build-up for the Cape Epic. Today’s result gives me confidence for this year’s Cape Epic,” smiled Platt, who will team up with Swiss racer Urs Huber again in his quest to win a fifth Cape Epic title.

In the women’s race, it became a three-rider battle from early on. As she did last year, Swedish marathon champion Jennie Stenerhag (Ascendis Health), set the early pace. De Groot and Kleinhans followed within three minutes of Stenerhag for the first half before moving past the Swede on the climb to the Queen of the Mountains prime just before halfway.
Kleinhans claimed the hot-spot prize, but then punctured on the rough descent that followed. This left De Groot in the lead with Stenerhag not too far behind. The two Ascendis Health riders completed the remainder of the race separately, but finished an impressive 12th and 13th overall to claim the first and second place positions.
De Groot clocked a time of 5:46:27 with Stenerhag three minutes back in 5:49:46. Kleinhans was 27th overall in 6:09:07, the first time in six years she hasn’t been the first woman home.
“Ariane had a small gap on me over the Queen of the Mountain climb. Once I was in the lead after her puncture, I had to race my own race. I had paced myself really well for the first half so still felt really good at that stage. I was expecting to have to contend with the headwind on my own in the final 40km, but it wasn’t as strong as I’d anticipated,” explained De Groot.
“To win Attakwas is pretty special! It’s considered one of South Africa’s toughest one-day races and it’s one of the few marathons where the women race the ‘ultra-distance’ the same as the men. It’s also where I have been doing a lot of my training as I now live about 5km from the finish,” smiled De Groot.
“I had a few illness and injury issues to deal with last year, but I’m 100% healthy again and I’m looking forward to another season of racing for Ascendis Health and tackling some stage races with Jennie, who seems to be in great form,” added De Groot.
Jeannie Dreyer (RMB USN) and Theresa Ralph (Galileo Risk) rounded out the top five places in the women’s race.
2016 Fairview Attakwas Extreme Challenge
121km, 2900m ascent, Oudtshoorn
Leading results:
Overall men:
1 Tim Bohme (GER) Team Bulls 04:56:24
1 Karl Platt (GER) Team Bulls 04:56:24
3 James Reid (RSA) Team Spur 05:17:12
4 Simon Stiebjahn (GER) Team Bulls 05:25:55
5 Gert Heyns (RSA) SCOTT LCB Factory Racing 05:27:00
6 Timothy Hammond (RSA) 05:30:12
7 Craig Gerber (RSA) 05:31:43
8 Doug Brown (RSA) 05:31:43
9 Matthys Beukes (RSA) SCOTT LCB Factory Racing 05:38:00
10 Robert Sim (RSA) 05:40:24
Overall women:
1 Robyn de Groot (RSA) Ascendis Health 05:46:27
2 Jennie Stenerhag (RSA) Ascendis Health 05:49:46
3 Ariane Kleinhans (SUI) Team Spur 06:09:07
4 Jeannie Dreyer (RSA) RMB USN 06:19:20
5 Theresa Ralph (RSA) Galileo Risk 06:20:49
6 Reinette Geldenhuis (RSA) 06:23:17
7 Carmen Buchacher (RSA) 06:31:37
8 Ischen Stopforth (RSA) 06:38:52
9 Louise Ferreira (RSA) 06:45:38
10 Sharon Laws (GBR) 06:47:29
For full results and other race information, visit www.atta.co.za.
Fairview Attakwas Extreme Mountain Bike Challenge featured Team Bulls 2016-01-18
Tiaan Pretorius