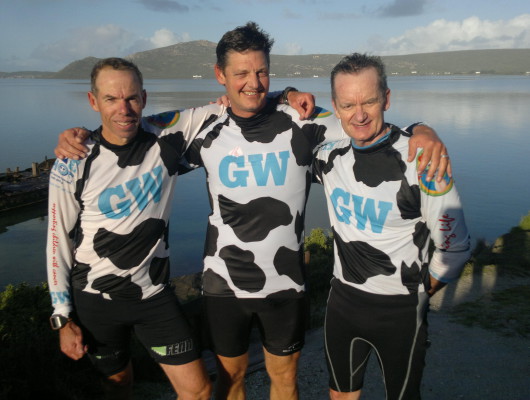 Langebaan based paddlers (from left) Rob Meintjes, Adrian Ceruti, and Angus Nel are preparing to compete in the 2015 Berg River Canoe Marathon with two other clubmates to honour the legacy of their friend Georges Willis, who passed away from bladder cancer shortly after the 2011 Berg. – Supplied/
Gameplan Media

Paarl – When the big field of paddlers leaves Paarl at the start of the 2015 Berg River Canoe Marathon on 15 July, a group of five wearing cow-coloured kit will set out to honour the legacy of gutsy cancer sufferer Georges Willis and his courageous final Berg effort in 2011.

Willis was diagnosed with advanced bladder cancer in late 2010 and, despite the debilitating effects of his treatment, set out to complete his third Berg to raise funds for the Childhood Cancer Foundation of South Africa (CHOC) children home that had made a deep impression on him.

A weakened Willis offered to raise funds for the organisation based on the number of kilometers of the 240km long Berg he would complete and soon a group of six friends committed to helping through the race, one of them Langebaan based friend Rob Meintjies.

By the time he started the race over R200 000 had been pledged to CHOC if he completed the entire distance.

“When Georges became aware of the CHOC children’s plight it reminded him that no matter how dire one’s situation may appear to be, there is somebody else who is in a less fortunate position,” recalled Meintjies in a social media post this week.

The race was a daily struggle for Willis but with the help from what became known as “Team CHOC” he coped, albeit slowly, with the demands of the cold river, it’s many tree-blocks, the weirs and low level bridges.

“By the end of Day One his body was taking big strain and he was hardly able to sit in his boat let alone get out of it at the finish,” remembers Meintjies.

“The feeling of emotion as he and his CHOC team paddled over the finish line at the end of day two was immense; every paddler and spectator came out and stood as one and applauded long and hard as Georges crossed the line.

“His wife Chantel was handed the microphone to talk him in and there wasn’t a single person present who didn’t have had a lump in their throat,” says Meintjies.

Willis finished the four day race to a heroes welcome in Port Owen, Velddrif in what was to be his last Berg.

Meintjies and his friends however were so inspired by his courage and determination that they committed to rekindling his spirit in every subsequent Berg, paddling in the cheerful black-and-white cowhide livery now famous for the CHOC “Cows” but with the letters GW on their chests.

This year five paddlers will set off as Team CHOC – Meintjes, Adrian Ceruti, and Angus Nel – the only person to have paddled in Team CHOC every year since 2011 – together with David Warmerdam and Berg novice Mark Preyser.

“I have re-read the tribute that I wrote to Georges so many times and it never fails to strike me how brave he was,” said Meintjies.

“It will be a lot tougher this year than it was in 2011 because then we were all so focussed on helping Georges get to the end of each day that we didn’t concentrate on how tired or sore we were.

“Every time I get tired I just remind myself that “If Georges can, then I can” which serves as a reality check and reminds me how he never complained even though we all knew he was really suffering,” said Mientjies.

The five Team CHOC paddlers will be setting out principally to honour the legacy that Willis left behind and are encouraging donations to CHOC in honour of the their fallen colleague.