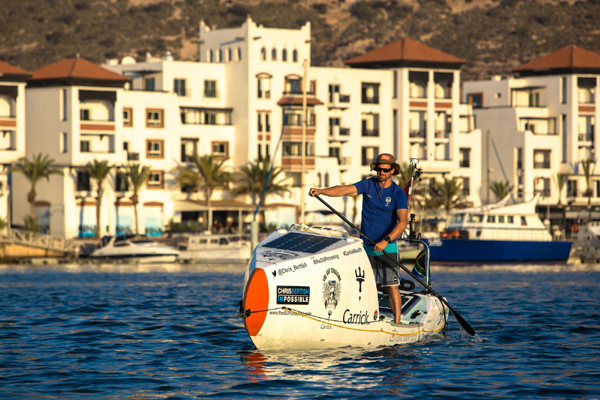 He took learnings from his experience on countless prior world record attempts and achievements, as well as knowledge from his sailing and big wave ocean experience, coupled with elements from his record breaking, open ocean SUP’s and the Transatlantic row boat crafts, to create a completely unique craft, designed specifically for one goal, one purpose, to cross the Atlantic Ocean.

Dubbed, the greatest solo, open ocean adventure ever attempted, Chris will depart from Agadir in Morocco, this morning, after completing the final craft testing, preparations and awaiting the right weather window to depart. Starting off on the Northwest coast of Africa in Morocco, he will begin the voyage to the Canary Islands, across the Atlantic Ocean towards the Caribbean Leeward Island of Anegada, before finally ending the journey in Florida.

After six months of building the craft, months of intense training and preparation and five years of stringent planning, Chris will use his wealth of knowledge and experience (over 25 years) to paddle across 7 500 km of open ocean, doing the equivalent of a marathon a day for over 120 days straight.

Every element of the crossing has been meticulously accounted for. Chris has spent a significant amount of time co-designing the world’s first, Trans Atlantic SUP craft, which was specifically designed for this crossing. He has taken elements from everything he has learnt through his countless world record attempts and achievements, as well as what he has learnt from his decades of sailing and big wave ocean experience, coupled with elements from the Transatlantic row boat crafts to create something completely different, designed specifically for one goal, one purpose, to cross the Atlantic Ocean. 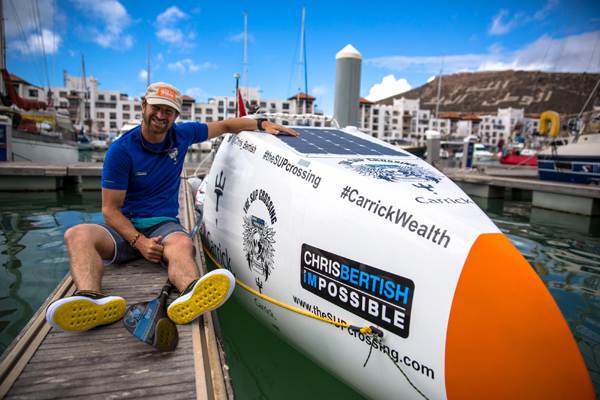 The main purpose of this crossing is to leave a legacy by raising funds for: The Lunchbox Fund, Operation Smile and Signature of Hope with the target of raising R20 million and making the entire project a completely self sustainable charity initiative, that will have a lasting legacy for generations to follow.

Chris will also be working with, and doing research and raising ocean conservation awareness for the Two Oceans Aquarium, over the course of his crossing.

Said Chris just before he departed, “I’m really excited and looking forward to leaving, as this has been a 5 year project in the making and a lifetime of preparation and I am finally ready. My specialised SUP craft is incredible, I have an amazing team behind me, supporting me from land and unbelievable support from friends and people all around the world for this journey, which is going to change the lives of millions of children in Africa. That is what will keep driving and inspiring me right till the end.”

Craig Featherby, Carrick Wealth Group CEO concludes, “Carrick supports the courage that Chris Bertish will be drawing on to achieve not only a record-breaking, stoical physical feat but also the very purpose of the Crossing – and that is to raise money for hot meals, life-changing surgeries, and schools for young children in need throughout South Africa. We stand behind the SUP Crossing and commend Chris for being an inspiration to all. He is a remarkable, skilled adventurer and motivator, and like him, we, too, believe that nothing is ‘impossible’.

“The SUP Crossing is ‘Performance with a Purpose’ and that is what Carrick stands for. As a company, we continue to find ways to achieve results without compromising our company and personal values. The passion and commitment that is Chris Bertish’s is the very same passion that we as an organisation strive for. We would like to wish him well and are100% behind him.”

If you would like to contribute or donate, please go to: www.thesupcrossing.com/donate/

Keep the conversation going with the official hashtag: #theSupCrossing #CarrickWealth

For more details on Chris Bertish visit the following channels: