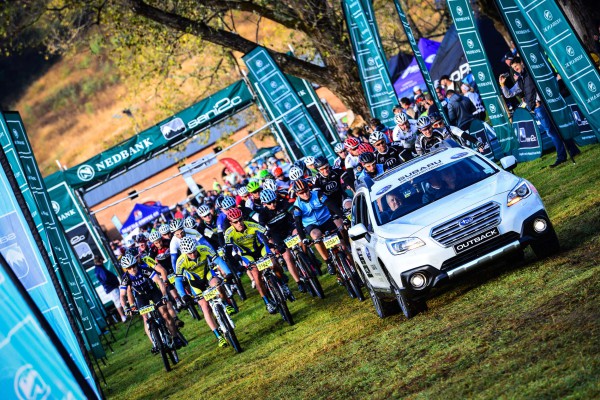 Howard Christie (driving) leads out the Trail event at the 2015 KAP sani2c as he and his Subaru team began their tenth year of involvement in the sani2c and with that he became an honoury Black Mamba – an award only given to riders who have completed ten sani2c’s. Darren Goddard/ Gameplan Media

Himeville – Despite his passion for four wheels, Subaru Pietermaritzburg’s Manager Howard Christie has never braved the three-day KAP sani2c on a mountain bike despite having an over ten year involvement in the iconic journey from Glencairn Farm in the Southern Drakensberg to Scottburgh on the KwaZulu-Natal South Coast that takes place in 2016 from 10-14 May.

With three different events taking off over the three days and between 1400 and 2500 riders in each, the logistical significance of having vehicles and drivers that are reliable is immense and Christie and his team have been vital in providing that peace of mind for the organisers over the years.

Christie and his Subaru Pietermaritzburg crew have provided this integral service to the popular event with support vehicles – from lead out vehicles to medical vehicles – with Christie himself being a vital cog in striking up the relationship with the event.

“I remember seeing the sani2c on TV a long time ago and noticing that they didn’t have any sponsors,” Christie mentioned. “I then met Glen Haw at the Royal Show in Pietermaritzburg and asked him if we could get involved from a sponsorship point of view.”

“He was excited about the partnership which meant that we had to approach Subaru South Africa with the proposal and once they gave it the green light, the race became the Subaru sani2c – the first title sponsors of the race.

“We were the title sponsors for six years but this year will see our involvement in the race extend to eleven!”

The Christie family has become heavily involved in the race with Howard receiving help from a number of family members along the way.

As the family became more involved in the race, organiser ‘Farmer Glen’ Haw felt that they deserved some added, extra special recognition and so granted the Christie family honorary membership to the Black Mamba club – an honour traditionally only bestowed on riders who have successfully completed the race ten times or more.

“The whole family have become Black Mamba’s – by that I mean myself, my brother, my nephew and my son.

“The race is such a special event and we appreciate the support that we get out of it, which is important as it plays an important role in keeping this relationship blossoming.

“We provide the event with 21 vehicles, which help in making the event as successful as it can be and the Christie family continue to help by driving these vehicles and assisting wherever we need to,” Christie added.

The Christie family’s involvement in mountain biking recently extended beyond their usual behind the scenes roles.

“Although we have given a lot in helping events like the KAP sani2c and the Old Mutual joBerg2c run smoothly, this year I am proud to say that my brother, nephew and son completed the joBerg2c, this time as participants!” he said proudly.

Despite the KAP sani2c being a race that he knows better than most of the riders themselves, Christie is all too happy to continue enjoying being a part of the action from the comfort of his fleet of Subaru vehicles.

“I own a mountain bike but I have not ridden it in two years,” he mentioned candidly.

“I would love to get it out and take part in the sani2c however I think I might be a little too old for that sort of thing now!”