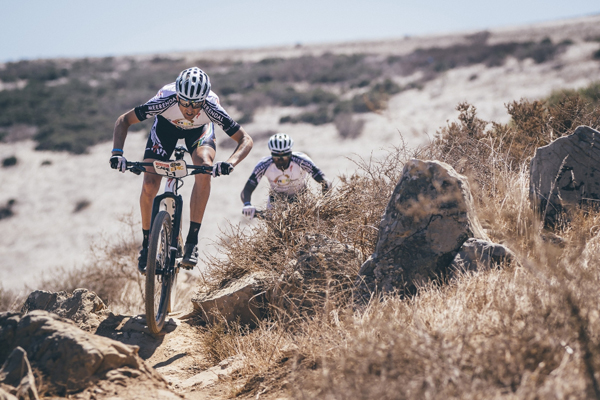 Christoph Sauser in action alongside Sipho Madolo in the 2016 Absa Cape Epic.

The Absa Cape Epic’s joint most decorated champion, five times winner, Christoph Sauser is back. Returning after a year in retirement the Swiss star will once again be teaming up with Jaroslav Kulhavý, of the Czech Republic, in an attempt to win his sixth Cape Epic title.

Sauser will be representing his songo.info charity and sponsor Investec Asset Management. He and Kulhavý will be racing as team Investec-songo-Specialized. The pair teamed up successfully before having won the Cape Epic in 2013 as Burry Stander-songo and in 2015 in the colours of Investec-songo-Specialized. Their bid for the Cape Epic title will be undertaken on Specialized S-Works Epic mountain bikes, bikes which have come to be synonymous with the world’s toughest mountain bike stage race. For Sauser the challenge which drew him out of retirement is to once again stand on the top step of the Absa Cape Epic podium.

In 2016 Sauser took up a coaching and mentoring role with the Specialized XCO Racing team, in addition to working with the Specialized engineers on product development. He offered his wealth of experience to mountain biking’s rising stars U23 World Champion Sam Gaze and multiple junior champion Simon Andreassen, as well as to three-time Cape Epic winner and current XCO World Champion, Annika Langvad. But his famous competitive streak was not satisfied by sharing in the victories of his protégées and after a highly competitive showing alongside Gaze at the FNB Wines2Whales, Sauser is confident he can compete at the highest level.

Sauser explains: “Since my retirement I have kept on riding my bikes, because it remains my passion. I never did intervals, just much more riding my trail bikes. During the past weeks after I signed up for a South African stage race, and raced it with U23 World Champion Sam Gaze, I realized that I quickly gained deep shape during my training and I was happy with my numbers.”

Sauser’s bid for a sixth Cape Epic title will be built on training blocks in Switzerland and from his second home in Stellenbosch, where he says he is looking forward to re-joining his old training group. He will also be racing extensively between now and March with the Pennypinchers Origin of Trails, the Fairview Attakwas Extreme MTB Challenge, the Tankwa Trek, the BestMed Tour of Good Hope and the MTO Songo Champions Race all on his schedule.

For mountain biking fans and Sauser alike the Attakwas Extreme and the Tankwa Trek will be key indicators of his progress, as both events are expecting to attract a world-class field, given their new UCI status. Along with Sauser’s perennial rival, Karl Platt, the events are likely to see the full Team Bulls roster and Alban Lakata’s Topeak Ergon team take part.

Assisting Sauser by providing mechanical and pace making support will be the NAD Pro MTB team of Nico Bell and Gawie Combrinck. Bell provided support for Sauser in both the 2014 and 2015 Cape Epics and had the following to say about riding as Sauser’s back-up team in the 2017 Cape Epic: “New Africa Developments is extremely proud that its cycling team (Team NAD Pro MTB) has been selected by Specialized Racing to join forces with race favourites Christoph Sauser and Jaroslav Kulhavý for the 2017 Absa Cape Epic. A tough stage race like the ‘Epic’ is very much a team sport and to have any hope of winning the team needs to not only ensure it has four riders in peak physical condition but also outstanding technical expertise. We believe Team NAD Pro MTB brings both these critical attributes to the team.”

For their part Sauser and Kulhavý are excited to have Bell and Combrinck in their corner again, as the Swiss rider elaborated: “We could not have asked for a better backup team in Nico and Gawie. They are one of the most experienced teams; super reliable with big engines! Their commitment towards us is huge and it will be our best insurance to perform in the face of the adversity which the Cape Epic inevitably produces.”

As one of the Cape Epic’s official development charities, songo.info has been awarded two entries to the 2017 race and the rising stars of the songo.info programme are sure to challenge for the Exxaro development category. songo.info has a history of strong showings in the category with Sipho Madolo and Azukile Simayile winning it in 2014.

Commenting on the return of Sauser, the Managing Director of Investec Asset Management, Thabo Khojane, observed that: “When Christoph Sauser retired, we chose to continue our partnership with the songo.info charity. The work that Kathy Crabbe and her team do with the community in Kayamandi is invaluable. Coming out of retirement is incredibly difficult and risky, as we saw with the two Michaels, Jordan and Phelps. But we also know that Sauser and Jaroslav Kulhavý are world class. We will be their biggest supporters, as they seek their third title together.”

Sauser is looking forward to the challenges ahead and will draw on the enthusiasm of the songo.info children to motivate himself through the long hours of training and racing which lie ahead. For as much as they are enthused to take up mountain biking by his performances he too is inspired by them. “It will be a huge inspiration for our kids again to be part of the build-up and cheering us on during the race,” he concluded.