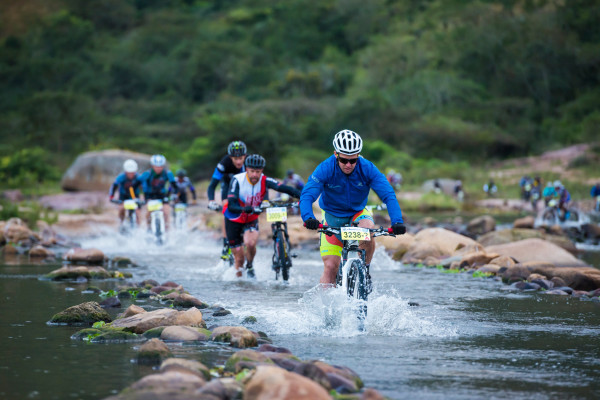 The riders had to deal with a few chilly river crossings on the second and final stage of the 2016 BSi Steel dusi2c. Anthony Grote/
Gameplan Media

Blue Lagoon – Having built up a healthy buffer after stage one, Andrew Hill and Tyronne White maintained their dominance with another stage win and the overall BSi Steel dusi2c title on Sunday while the Jeannie Dreyer and John Ntuli combination was the strongest mixed combination over the two days of racing.

The benefit of having a healthy lead meant that Team TIB’s Hill and White were not required to push the pace, and after the group broke down to two pairs early on the leaders had to make sure that they did not lose touch of the Team Safire outfit of Warren Price and Trevor Rowe.

“Today was going to be a day that was going to suit Trevor and Warren because of their strengths on the flats,” first-time winner Tyronne White commented.

“We didn’t have to make the pace so we wanted to be a little conservative to avoid making any mistakes.

“We rode a good tempo and it was great to ride with them [Team Safire], it was a lot of fun and we really enjoyed the route – it ended up being a really nice day for riding!”

White was a bit concerned about his fitness levels following a break from riding to enjoy his honeymoon however he suggested that the second stage was going to be a lot easier on the body.

“Today was a lot better, there is not as much climbing so I didn’t have to suffer as much but I can’t wait to get fit and back to racing level so I don’t have to sit behind Andrew as much!” he chuckled. 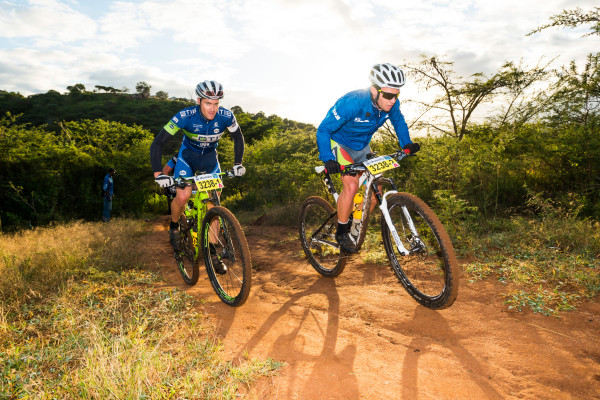 With a sound buffer going into Sunday the Team TIB duo of Andrew Hill and Tyronne White maintained that gap to take the overall title at the end of the second and final stage of the 2016 BSi Steel dusi2c. Anthony Grote/
Gameplan Media

Hill, who has won every edition of the BSi Steel dusi2c, has seen the race grow from strength-to-strength and ranks the 2016 edition of the race up there as one of his favourite instalments of the event.

“The race has definitely improved every year and having guys like the Durban Green Corridor involved cutting and setting up the trails really just helps the race step up every year.

“With all factors considered I would definitely say that this year’s race ranks up there with one of the best I have raced,” Hill mentioned.

Hill claimed his fourth title in 2016 but White returns home with his first and the North Coast resident is happy that the planets finally aligned allowing him and Hill to take on the two-day adventure together.

“It is awesome to get a win on my first dusi2c and especially with Andrew who has won so many and we have always wanted to do the race together but unfortunately the opportunity never arose so it was great that this year we managed to team up for the race and get the win,” a satisfied White added.

Team Safire were always going to be up against it coming into the final stage and with such a sharp, flat stage the chance to get away from the leaders never arose however the Price and Rowe duo held on to their second place comfortably.

The final spot on the podium was a fight between two of the RMB Change a Life Academy teams with their Number One team of Ndumiso Dontso and Sipho Kupiso starting the stage in third place as Bongmusa Zikhali and Siyanda Masango started Sunday in fourth place.

After a slight mechanical error on the start line on Saturday, which cost them five minutes at the end of the stage, Merchants’ Jeannie Dreyer and John Ntuli rode the complete race to take the overall title in the mixed category from overnight leaders Sani Racing’s Andrew Houston and Bianca Haw.

“John and I chatted this morning at breakfast about how we were going to go about today and I said that we should just see how the day goes instead of setting our minds on chasing down Andrew and Bianca.

“We knew that today was going to be difficult because of the pace of the stage and five minutes is a lot of time but when we got passed Bianca and Andy we just knew we had to put our heads down and go as hard as we could!

“The day went according to plan today but the legs did blow! That was the plan, though, go until you blow!” she joked afterwards.

Ntuli echoed Dreyer when talking about the effort that they had to put in on Sunday to overturn the advantage that Houston and Haw had built up after the first stage of the race.

“Jeannie and I raced really well today and I am really happy that we were able to make up the time on the leading mixed team.

“Jeannie was incredibly strong and I felt good which helped us a lot in chasing down the leaders – I’m really happy with the result!” an elated Ntuli commented.

The 2Fast2Furious pair of Wesley and Candice Parker-Dennison managed to hold on to their third place in the mixed category after starting the final stanza of the race with a lead of just under a minute.

The Highway Bakkie duo of Brenda Potts and Sarah van Heerden finished the race as the leading ladies pair following the two days of racing.

For more information go to www.dusi2c.co.za