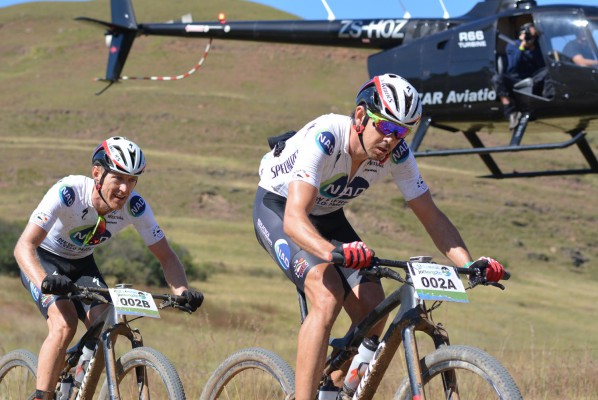 The NAD Pro duo looked in imperious form as they left their major rivals in the dust on the daunting 98km ride in the Southern Drakensberg between Nottingham Road and Glencairn farm on the Sani Pass road.

Thule-Pyga-TIB’s Andrew Hill and Tyronne White were third in 4:10:49 (23:33:16) to consolidate their third place in the general classification.

“It was a really aggressive start this morning,” said a visibly relieved Combrinck.

“Hanco (Kachelhoffer) and Pieter (Seyffert) put everyone in the gutter on the tar road, which made for a really hard start.

“Then we set a fast tempo up the Gumtree climb and when we saw HB was going off the back we put in an attack. From there it was just flat-out all the way to the finish.”

Combrinck and Bell, who lost more than three minutes on day four after suffering a cut tyre and then fading towards the finish, built a lead of more than two minutes by the second waterpoint.

“We could see them (Telkom) behind us, but we took it quite easy in the technical stuff,” said Combrinck.

“The course was also tricky to navigate today, so we made one or two small mistakes.

“Also, on the descent after the second waterpoint, I clipped a rock and damaged my rear rim, but luckily we managed to repair it quickly and it lasted to the end.”

Combrinck, who hails from Nelspruit in Mpumalanga, said they had been racing aggressively every day and felt the victory and overall lead was well deserved.

“We put in a hell of an effort today, so, yes, hopefully we can keep it to the end.”

The 30-year-old said that even though they were now ahead, they would be looking for more opportunities to gain time.

“We race our best when we are going flat-out. When you sit up and try to take it easy is when you make mistakes.

“We’ll possibly go more conservatively about our business, but we’ll be looking for gaps nevertheless.

He said they were very impressed with the new route.

“It was an awesome stage; very fast in the beginning and I loved the new single-track. The cattle tracks were also pretty amazing.

“And we love the long climbs and there were lots of that today.”

The 32-year-old Bell, who is also from Nelspruit, said the course suited them.

“On the district roads someone like Johann is very strong and he can pull his teammate along, but on the climbs and single-track it is every man for himself.

“The final 10km are very tough. It is up and down and you don’t see the race village until the very end – I think the backmarkers will struggle today.”

Darren Lill and Candice Neethling, from Dorma-USN-Purefit, moved into second overall in  the Lanham-Love Attorneys mxied category when they took their second stage win 4:19:04 (24:47:58).

The overall leaders, Johan Labuschange and Catherine Williamson from The Bicycle Company-Bestmed, were second in 4:23:50 (24:32:36).

Grant Usher and Amy McDougall, who lost time yesterday due to a broken saddle, finished third in 4:26:05 (24:48:39) to fall back to the bottom step of the podium.

“I think we are getting stronger as the race is progressing,” said Lill, a former national road champion.

“I’m really proud of Candice who is racing in a multistage event of this calibre for the first time.”

He said they decided to put pressure on the other mixed teams early on and knew from the profile that there was a steep climb at about 20km.

“The whole stage was new and none of us really knew what was coming, I don’t think.

“We went hard up that first climb, got a bit of a lead and consolidated on the plateau on top.”

Lill said he knew where he wanted to make the stage hard to gain an advantage ahead of the technical sections, which suited both of them.

“We kept it safe on the descent and still had a decent gap going through the valley on the other side. We just did our best to keep it steady and hopefully open up our lead.”

The seventh stage of the 900km race will take riders over 82km to Mackenzie Club at Ixopo.

The nine-day Old Mutual joBerg2c ends in Scottburgh on Saturday.