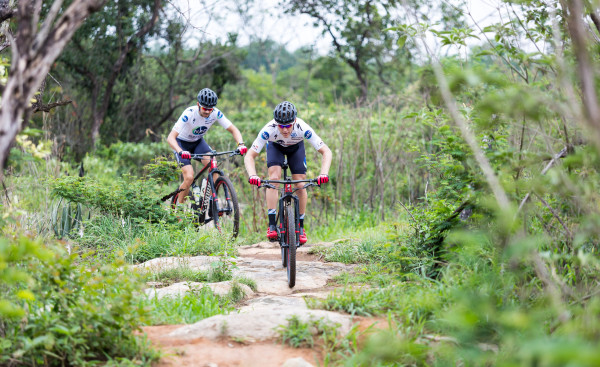 The NAD Pro MTB Team pair of Gawie Combrinck (front) and Nico Bell (back) have thrown their names into the 2016 KAP sani2c starting at Glencairn Farm outside Himeville from 12-14 May 2016. JB Badenhorst/
Gameplan Media

Himeville – Following their impressive victory at the recent nine-day long Old Mutual joBerg2c, the pair of Gawie Combrinck and Nico Bell have added their names to the already formidable list of elite men’s contenders as they look to do the double at the upcoming KAP sani2c which takes place between Glencairn Farm in the Southern Drakensberg and Scottburgh on the KwaZulu-Natal South Coast from 12-14 May.

The NAD Pro MTB Team pair dominated large parts of last week’s journey from Gauteng to the coast with their race playing out as hoped, despite encountering a minor glitch along the 900km route.

“We raced well at the joBerg2c and the race went according to plan for us, which was a real advantage!” said the first three-time winner of the joBerg2c, Gawie Combrinck. “We had one minor issue where we had a mechanical which meant that we fell behind and missed out on the sprint finish at the end but otherwise it was a great race for us.”

With the gruelling joBerg2c behind them, the two weeks building up to the KAP sani2c is crucial in getting the duo ready to take on the next challenge.

“We are lucky that we race all year round so we see joBerg2c as a really hard block of training with the period between races being about recharging the batteries and getting healthy again, especially after Nico and I started getting a bit ill towards the back end of joBerg2c,” explained Combrinck.

The Nelspruit based pair are no strangers to the KAP sani2c with both having completed the event a handful of times previously.

However, with the three stages fresh in their minds following their joBerg2c triumph, Combrinck is even better poised to assess how the recent course changes will affect them.

“There are a few minor changes to the course and I think that the start on day one is now going to be a lot faster; we are going to have to go a lot harder from the gun than we have done in the past!

“The changes are more like slight improvements rather than wholesale changes and they are not too technical which means that the chances of building gaps are a little slimmer so it’s going to be a tough showdown,” the Lowveld local mentioned.

With the historically frantic pace at the front of the field and one of the more competitive fields assembled for the KAP sani2c in recent times, Combrinck believes that it is the perfect recipe for an exciting race.

“Just about everyone is going to be there and you cannot rule anyone out with only three days of hard racing ahead.

“The Team Telkom guys were really strong at joBerg2c and will definitely be a huge threat however the USN-Purefit team of Darren Lill and Waylon Woolcock are defending champions and will be determined to defend their title.

“You cannot rule out Matthys Beukes and Gert Heyns from Scott who might have had a poor SA Marathon Champs but will always be a threat.

“Those are just a few of the teams that will be pushing hard for a podium,” he reflected.

The opening stanza of the sani2c is a frenetic one and Combrinck is aware that they may be at a slight disadvantage should the first stage come down to the wire however with the challenges of the second stage playing into their hands, the NAD Pro MTB Team rider feels that he and Bell will be able to gain the ascendancy if all goes according to plan.

“The first stage is historically a sprint, which is not our strong point, and there are not many areas along the route where you can open up time of the other teams which means that we will have to make sure we are in the mix at the end.

“Day two is the real test as we set off so early and so making it down to the bottom of the uMkomaas Valley safely is priority number one but after that the climbing and the technicality of the run in to the finish should play to our strengths,” he added.