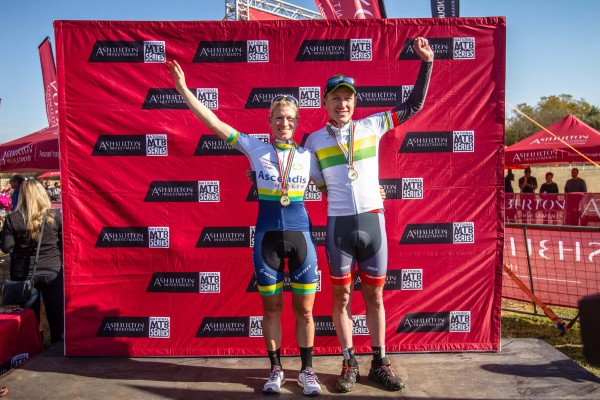 Although both enjoyed healthy leads, Combrinck did not have the race sewn up until a few kilometres from the finish whilst in contrast De Groot was far too strong for the women’s field. Combrinck was chased hard by the duo of Nico Bell (Team RECM) and Konny Looser (Wheeler iXS) but ultimately had enough in the tank to keep them at bay.

The Team EAI Cycling star came into the race under a bit of a cloud and was not setting his expectations too high for the race but once he got going he felt that there was a chance that he could get ahead and stay ahead and from there he never looked back.

“It is such an awesome feeling!” the smiling Combrinck mentioned. “It was really unexpected considering I haven’t had the best form over the past few weeks and I was expecting to come here to help out my team mate. 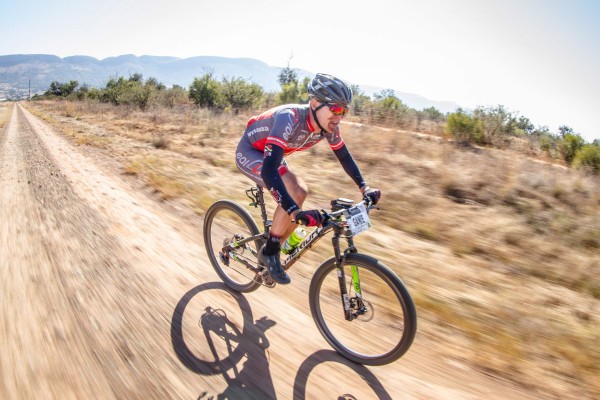 Team EAI Cycling’s Gawie Combrink stole the show when he unexpectedly raced to first place and the over title at the Ashburton Investments National MTB Series Van Gaalen, which doubles up as the 2015 South African Mountain Bike Marathon Championships powered by Stihl on Saturday. – Craig Dutton/
Gameplan Media

“National Champs is always a hard race with guys tending to be a little negative so on one of the downhills I managed to open up a gap and just kept myself out in front which was great!”

There was a stage towards the end of the race that Combrinck was being chased hard by a couple of riders but the Mpumalanga resident knew what to expect in the run in to the finish and once he had a slight buffer he knew that if he kept his wheels down he would have his first National Championship crown.

“The course is really technical with a lot of single track but as we got closer to the end I knew what to expect and I knew that if I could get over the top of the last big climb with a two minute lead then I would have the race in the bag.

“I lost my water bottle at about 70km so I knew that I had to conserve energy so I just made sure that I kept it together coming into the finish and it all worked out for me on the day!” Combrinck added happily.

There was drama early in the elite men’s race when Team RECM’s Erik Kleinhans was forced to withdraw from the race whilst his team mate and two-time defending champion James Reid was forced to stop to remove wire from his wheel and had to make up some lost time on the leaders who were flying ahead.

That stop proved to be costly for the young rider who was never able to make up enough time to challenge for a podium spot as his team mate Nico Bell took second place whilst the flying Swiss Konny Looser rounded out the podium in third place. 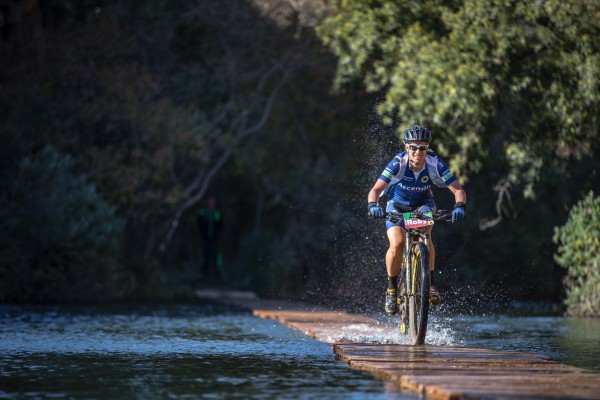 With the pressure of trying to retain her title Ascendis Health’s Robyn de Groot took it all in her stride as she powered to a hat-trick of National Titles at the Ashburton Investments National MTB Series Van Gaalen, which doubles up as the 2015 South African Mountain Bike Marathon Championships powered by Stihl on Saturday. – Craig Dutton/
Gameplan Media

The ladies race was a one horse race as two-time defending champion Robyn de Groot annihilated the rest of the women’s field to cruise to her third consecutive National Championship title. It has been a tough few months for the Ascendis Health rider who has been battling with illness but on Saturday she was in a league of her own and was understandably happy with her performance.

“I am just really happy with the way everything went today considering what has happened in the past few months,” an elated De Groot said. “It went really well and after Yolandi de Villiers set such a fast early pace I thought that I wasn’t going to be able to hold on but the downhills came at the perfect times for me after suffering a bit on the uphills so it all just worked out for me.”

The cold conditions was another factor that she had to conquer and it did not seem to be too much of an issue as she got further and further into the race and once she was clear just maintaining her advantage and taking in the moment was at the forefront of her mind heading into the finish.

“Winter got to Johannesburg on Thursday and it was bitterly cold earlier this morning which added a different dimension to the race but I managed it well.

“When I got into the last 10km I knew that it was going to get a bit technical so I couldn’t put a wheel wrong there but once I was through there I just tried to enjoy the moment and take in the victory.

“I didn’t want to give up my stripes today and I made sure that I put in all the effort early so that it paid off at the end,” she mentioned.

The podium in the ladies race was completed by the early leader and Sasol Racing star Yolande de Villiers and rounding out the podium was the young Specialized/Freewheel Cycology rider Candice Neethling.

There were a number of national championship titles awarded on the day from the junior categories right through to the masters. One of the stand out performances was Frances du Toit who won the Junior Girls title and with that her third national title of the year.