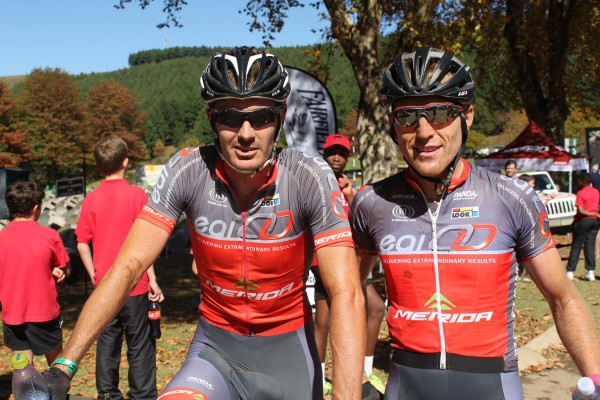 Race leaders Johann Rabie and Gawie Combrinck stamped their authority on the Old Mutual joBerg2c with an unequivocal third stage victory on day five of the nine-day mountain bike race on Tuesday.

The EAI Cycling duo hurtled into the finish at Clifton Preparatory School on Nottingham Road to claim the 112km stage from Winterton in a blistering time of 3:50:01.

Avis Van Rental’s Tyronne White and Andrew Hill were the second team to descend out of the surrounding forests and crossed the line in 3:54:55.

After suffering two mechanical setbacks, Pieter Seyffert and Hanco Kachelhoffer of Altech Autopage Karan Beef managed to hold it together to claim the bottom step of the podium in 3:58:34.

According to Rabie, their plan had initially been to take it easier after the two longest stages of the 900km race.

“But I saw that Gawie felt quite strong at the start and he was setting quite a good pace.”

The three teams, plus The Gear Change duo of David George and Justin Tuck, rolled together for the first half of the race.

“We went up some of the climbs and saw that the other guys looked like they were suffering while we were still feeling pretty good,” said Rabie.

“So we decided to go a bit harder and see what happens.”

At around the 60km mark, Rabie and Combrinck broke away on the major climb of the day up to Kamberg.

“I wasn’t sure if I wanted to ride the rest of the way alone but we opened up quite a gap on them without spending too much.”

Behind them there was a dice for second place, as Hill and White also got away from Seyffert and Kachelhoffer on the ascent.

“They managed to get back onto us and we worked together until Pieter punctured with about 20 kilometres to go,” said White.

“We looked back and we were on our own. Andrew was going really strong today, so I just tried to hold on to his wheel.”

In another dominant performance, SasolRacing’s Yolande de Villiers and Catherine Williamson tightened their stranglehold on the women’s race with an uncontested stage win in 4:23:53 (22:34:38).

With Leana de Jager unable to complete the stage, she and Johan Labuschagne, also of SasolRacing, forfeited their mixed category lead to Samantha Sanders and Justin Victor of Valencia Cycling (23:05:34), who finished second on the day in 4:42:26.

“There’s still a long way to go and anything can happen. We’re just happy we’ve got a stage win under our belts,” said Stelling.

In the City Lodge masters’ category, USN-Cycle Lab’s Chris Brand and Paul Furbank took one back from yesterday’s stage winners Greg Anderson and Peter Winn of Ascendis. They completed the stage in 4:15:53 to remain at the top of the standings (22:07:42).

Wednesday’s 98km sixth stage takes riders to Underberg in the foothills of the southern Drakensberg.