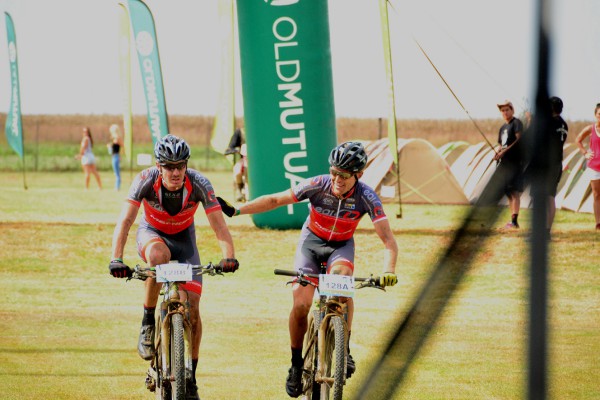 Combrinck and Rabie set the tempo on the 121km course from Sterkfontein Dam in the Free State to lead the plunge off the escarpment into KwaZulu-Natal.

The EAI Cycling duo powered into the finish at Winterton Country Club in a time of 4:18:27 to stamp their authority on the race and retain the overall lead in 16:39:46.

The Altech Autopage Karan Beef combination of Hanco Kachelhoffer and Pieter Seyffert rode hard to secure the runner-up spot in 4:19:44 to move up into second in the standings in 16:47:22.

Andrew Hill and Tyronne White of Avis Van Rental were unlucky to puncture twice on the stage. They limped into the finish in 4:22:56 to round out the day’s podium and slip into the same position in the general classification in 16:48:15.

Combrinck said the stage had been one of the most exciting of the race so far, with spectacular mountain views as they crossed the provincial border.

As the racing snakes rolled out of the mist-shrouded Sterkfontein resort, Rabie immediately went on the attack, said Combrinck.

“We set a good pace from the start and four teams got away, just like yesterday.

“We started the day with a four-minute lead so we decided to take it nice and safely through the technical sections.”

The podium finishers, with The Gear Change pairing of David George and Justin Tuck, rolled together as they headed for the edge of the plateau.

Seyffert and White both punctured early on, forcing the two teams to chase back to remain in the break.

The four pairs stayed together until the closing kilometres, when Combrinck and Rabie launched their final attack on Puffadder Pass.

The defending champions broke away over the top of the climb and opened up a gap as Combrinck took the lead into the singletrack.

When Rabie crashed, Hill and White fired up the afterburners to close Combrinck down but they could not narrow the margin.

After his mishap, Rabie rode back up to the Avis riders and was able to bridge over to his partner as the chase continued.

Disaster struck again on the district road when White hit a rock, effectively ending his team’s hunt for the stage win.

Hill, a KwaZulu-Natal native, said the overall time gap was not insurmountable however.

“We know tactically how we can get the better of the other guys, so we’ll see what we can do in the coming days.”

There was more drama in the mixed category as leaders Johan Labuschagne and Leana de Jager were forced out of stage contention due to injury.

De Jager crashed heavily around 56km into the route when her pedal clipped an anthill at high speed but managed to complete the stage in 5:08:48.

Despite finishing third on the day, their substantial overnight lead was enough to keep the SasolRacing duo top of the leader board in 18:20:22.

It is unclear whether De Jager will be able to continue the race but the pair are now less than three minutes ahead of stage winners Samantha Sanders and Justin Victor of Valencia Cycling (18:23:08).

By comparison, De Jager and Labuschagne’s squad mates Yolande de Villiers and Catherine Williamson had a near-perfect ride to win in 4:56:09 and tighten their grip on the women’s category (18:10:45).

In the City Lodge-sponsored veterans and masters racing categories, HiddenHunger’s David de Lima and Sean Henderson and USN-Cycle Lab’s Chris Brand and Paul Furbank scooped the respective stage wins in 4:57:22 (18:10:07) and 4:48:51 (17:51:49) to continue their category dominance.

On Tuesday, the riders leave the Central Drakensberg and cover a 112km route to Nottingham Road. The race finishes at Scottburgh on Saturday.