Coppa Bernocchi: MTN-Qhubeka active but to no avail 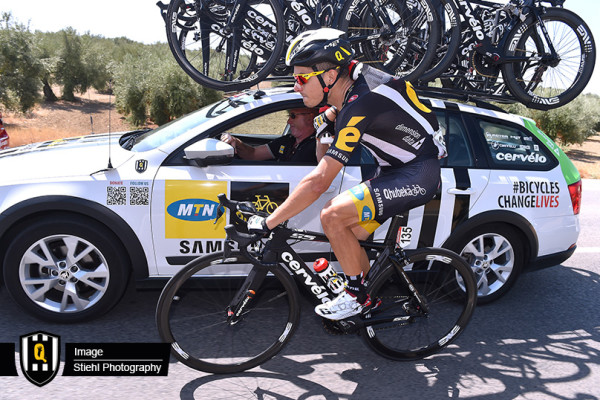 After just coming up short at yesterday’s Coppa Agostoni, Vincenzo Nibali (Astana) got his revenge today by winning the Coppa Bernocchi ahead of Mauro Finetto (Southeast) and Matteo Trentin (Italy).

Team MTN-Qhubeka p/b Samsung had an active presence in today’s race with Nic Dougall forming part of the first break of the day. With 22 other riders also in the move, the peloton realised the danger of such a big group getting away and chased down the one minute gap as fast as they could. 4 new leaders then went clear for the better part of the race.

The peloton kept the escapees in check though and with 50km to go and a gap of only 30″, the attacks started to fly from the peloton. There were 3 significant moves in the latter part of the race, first Kristian Sbaragli was part of a 9 man break that got up to 20″ before being caught again. The next counter attack contained Serge Pauwels but they too were reeled in before getting much more than 15″.

The 3rd big move came from a group of 6 riders and this would be the decisive attack of the day. Coming with just 25km left to go, the sextet only got a maximum lead of 35″ but it would be enough. After missing the move our African team led the chase from the peloton but it was to no avail. Nibali took a crafty win in the end with the peloton sprinting in for 7th place.

Alex Sans Vega – Sport Director
Obviously with Kristian having such good shape at the moment we planned the race around him. Just like yesterday, there were many attacks in the first 35km before a big group got away. Nippo-Fantini had to chase them down which they did. After this, a small group got away which was more manageable. When we got to the circuit our team went to speed up the race in order to reduce the bunch which worked nicely. From 50km to go Nibali started attacking, Kristian and Serge were both closing the gaps but at 30km to go Nibali got away. We chased with a few other teams helping us but the 6 rode strongly and could not be brought back. The team put in a good performance today, we rode as a unit and followed our plan well so we can still be happy with proceedings.