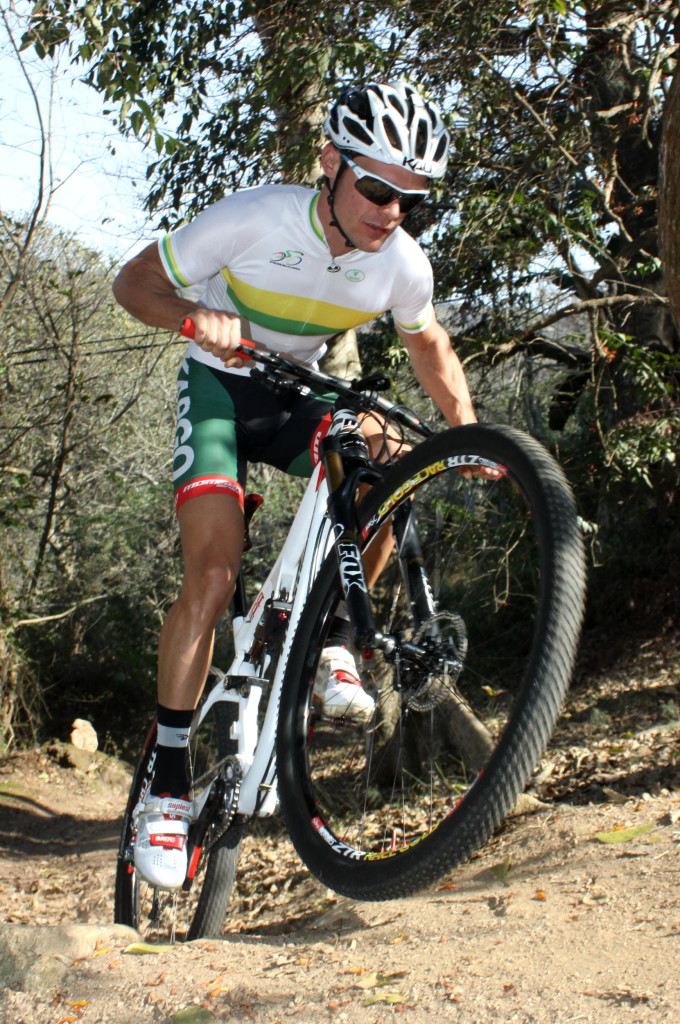 The KZN North Coast rider has won the national title at age group level every year he has competed in previously however, in his first year competing as an elite rider, he rose to the top step of the podium to clinch ‘the big one’.

“It has been such an honour to win the national champs at junior and under-23 level previously but they almost seem a little insignificant now in comparison to this elite title!” explained Croeser.

“This is the one I’ve worked so hard for not only this year, but my whole life. This is the one everyone talks about and looks up to. To have won it almost seems surreal still!” he added.

The Kargo star enjoyed a monumental tussle with the in-form James Reid (Trek South Africa) for the first three laps before Croeser’s race came just millimeters from an abrupt ending midway through the clash.

“I got away really well and James came with me. I pushed the pace on the first lap and then James came through at the start of the second and I knew I just had to do everything I possibly could to stay with him,” explained Croeser.

“We were still together and I went to the front again after three laps when I then sliced my rear tyre on a rock.

“I stopped immediately to let the tyre seal itself properly and as I did I saw James had punctured too but he carried on riding.

“When I got going again a spectator said James was 15 seconds ahead of me and when I came around the corner there he was, off the bike and with wheel off the bike as he tried to fix the puncture.

“I gave him my plug and then went on on my own where I just looked to be as careful as possible in the final few laps,” he added.

With the team having become the first South African based UCI Trade Team earlier this year, Croeser’s winning of national title goes hand in hand with the team’s goal of becoming the number one mountain biking team in the country and proudly flying the nation’s flag internationally as well.

A large portion of Croeser and team manager Shaun Peschl’s time in the few days before the national clash got underway was spent deliberating which of their Momsen machines was the one most likely to bring them success and in the end the decision to go for the SL929 paid off handsomely.

“Momsen’s Vipa was built for those conditions but the SL929 weighed in at sub 8kgs!” explained Croeser. “We didn’t take the decision lightly as we knew beating James (Reid) on this track was going to be tough and it worked a charm in the end!”

Croeser’s Kargo teammate and fellow elite rider Stuart Marais continued his good run of form as he crossed the line in fourth while the team also enjoyed great success in the men’s under-23 category with Travis Walker finishing on the bottom step of the podium and recent signing William Makgopo sixth. Junior men’s rider Marco Joubert finished seventh.

The all-round team success was extremely pleasing for the unit while both Croeser and Makgopo will take enormous confidence from their efforts as they now turn their attention towards preparing for the 2014 UCI MTB & Trials World Championships in Norway in September.