Croeser, Walker stay in the red 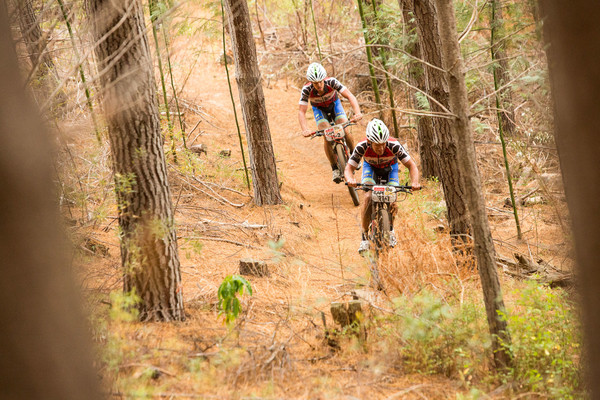 And that was not the end of their bad luck: “Only 5km into the stage my back brakes gave out. But you have to play the cards you are dealt … we are stoked to still be in the African leaders’ jersey.”

The jersey, for the first team from the continent to win, has become much sought after in recent years. Yesterday RED-E Blend’s South African pairing of Waylon Woolcock and Darren Lill broke away from their fellow riders but were caught towards the end of the stage by Walker and Croeser and dropped to fourth of the African teams. Lill looked to be out of sorts and struggling on hills towards the end of the stage.

EAI South Africa’s Gawie Combrinck and Johann Rabie moved into a surprise second place, with the fancied Scott Factory Racing team of Philip Buys and Johann Rabie third. The other fancied pairings of Max Knox and Kevin Evans (Biogen-Volcan) and Erik Kleinhans and Nico Bell (RECM) were sixth and seventh respectively, with the latter apparently having sacrificed their race to supporting overall leaders Christoph Sauser and Jaroslav Kulhavy (Investec-Songo-Specialized).

“There was a big battle to get to the front of the bunch to avoid the worst, so the pace was very high,” said Brentjens. “We were a few Masters teams together, but at Water Point 2 we saw that Nico (Pfitzenmaier) was (struggling) and we attacked to see what happened. My partner also struggled a bit today, but I told him to just hang on because the single track is coming.”

“There were so many climbs today … it was a hard and tough stage,” said Bucher. “It is a struggle with the rain, because it has an impact on your vision and it really becomes problematic.”

Meawhile, Mixed Category leaders Rene Haselbacher and Sabine Sommer (ENS RH77) extended their lead to over 10 minutes: “It feels really good to be in the lead,” said former Tour de France rider Haselbacher. “I am very grateful I have a strong partner because I am not a great climber, and with all the climbs today it could have been really bad.”

Second in the category are the Slovenian/German pairing of Peter Vesel and Ivonne Kraft (ETIS), ahead of South Africa’s Nizaam Essa and Briton Catherine Williamson (Asrin).