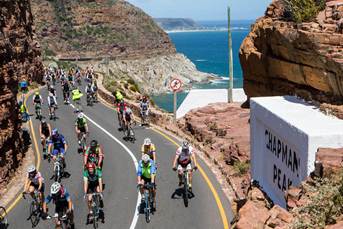 (Cape Town, 27 August 2014) The Cape Town Cycle Tour Trust (CTCTT), organisers of the annual Cape Argus Pick n Pay Momentum Cycle Tour, has announced that entries to the 2015 tour will open on Friday, 26 September 2014 at 1pm to coincide with an important announcement relating to the event.  The Cycle Tour – now in its 38th year – will take place on Sunday, 8 March 2015 with 35,000 riders lining up to tackle the spectacular 109km route around the Cape Peninsula.

David Bellairs, a director of the CTCTT, explains: “Traditionally, general public entries for the Cycle Tour have opened on the first day of September. This year, the entries open date has been delayed to coincide with an exciting announcement about the tour.  While a few changes will be introduced, they will not impact on the format of the route and our main priority remains to provide the world-class experience that participants and spectators have come to expect.”

The Cycle Tour has grown from humble beginnings, attracting only a few hundred participants in its inaugural year in 1978, to the much-loved international event it is today.  Acknowledged as the world’s largest timed cycle race, it sees keen cyclists from all over the world flocking to Cape Town on the second Sunday in March each year to participate in this iconic event.

For more information on the Cycle Tour, visit www.cycletour.co.za.