Cyclocross defending champ in limbo ahead of aQuellé Tour Durban 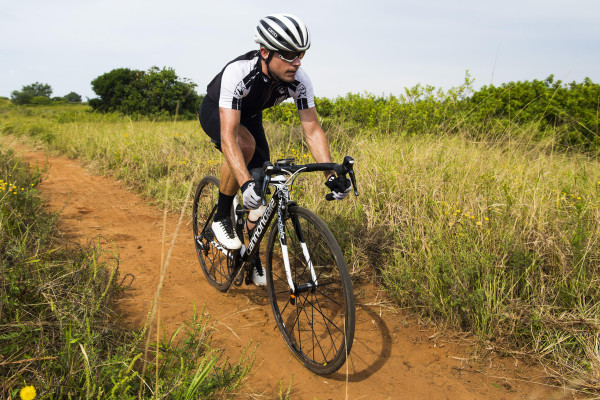 Darren Lill rode his road bike to a ground-breaking victory in the aQuellé Tour Durban 55km Cyclocross event last year but the USN Purefit rider is unsure whether he will be on the start line to defend his title or what equipment he will use come this year’s race on Sunday, 24 April. Anthony Grote/Gameplan Media

Durban – aQuellé Tour Durban 55km Cyclocross defending champion Darren Lill is keeping his cards close to his chest ahead of Sunday, 24 April’s race as far as his participation in the popular hybrid road and mountain biking event goes.

While the chance to defending his crown appeals to USN Purefit’s Lill, a busy calendar and his Western Cape base are elements he has to consider as well.

“At the moment I’d say there is a 50/50 chance that I’ll take part in this year’s Tour Durban cyclocross,” explained Lill, who partnered team mate Waylon Woolcock to the title of first African pair at the ABSA Cape Epic earlier this year.

“I’ve got Marathon National Champs this weekend so I’m focusing all my energies on that and haven’t really looked too far beyond that at this stage.

“My girlfriend has a cross country race up at Cascades in Pietermaritzburg the weekend after Tour Durban so if I’m in the area then I may well do it, but I’ll only make a final call next week sometime!” he added.

The 33 year-old stormed to a ground-breaking victory in 2015 when he overcame the mixed tar and trail route on his road bike while most others tackled the challenge on mountain bikes.

“If I do race this year then again there is a 50/50 chance as to whether I’ll use my road bike or my mountain bike.

“Using a road bike is definitely risky and I’d be curious to find out how many others have done it on a road bike and how many of those punctured.

“It will all come down to the route; if they’ve shortened the off-road section at all then perhaps a road bike does remain an option,” said the diminutive Lill.

Familiar local mountain biking talent Andrew Hill is disappointed by his absence from this year’s event, one he believes brings a unique flavor to the KZN cycling calendar.

“Unfortunately I won’t be at this year’s Tour Durban as Tyronne White and I will be taking part in the joBerg2c over the period,” explained the TIB Insurance competitor.

“Tour Durban’s cyclocross is a great event that allows riders to mix things up a bit.

“It is also great for cyclists to be afforded the opportunity to explore the main roads of Durban in the safety of full road closure before hoping onto the off-road stretch through Tongaat Hulett’s land – trails we don’t often get to ride as access is usually restricted,” he added.

The 105km road race, 45km fun race and 55km cyclocross race take place on Sunday 24 April 2016. Late entries will be taken at registration at Suncoast Casino & Entertainment World from 10h00-17h00 on Friday, 22 and Saturday, 23 April. More information can be found at www.tourdurban.co.za