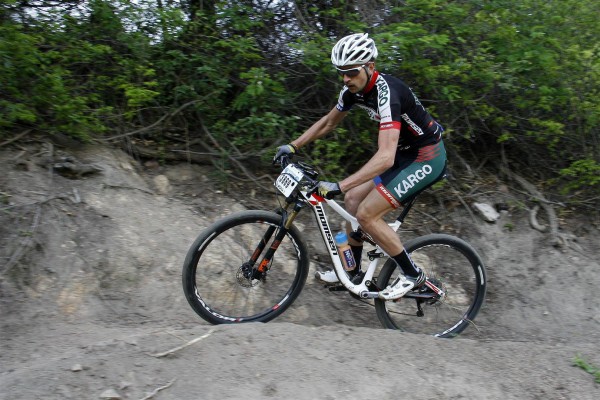 Harburg – Sunday 23 August’s aQuellé Tour de Krantz saw Brendon Davids continue his recent good run of form when he claimed his second victory in as many years at the event while Jeannie Dreyer comfortably clinched the women’s spoils for the third year running.

“It’s great to get another win under the belt and that things are looking up for me now,” said Davids. “I had the form after the Cape Epic but things didn’t quite go my way this season so it’s really good to finally be a positive frame of mind and doing well again!”

“I knew I’d have to make the racing as hard as I could from the start on Sunday so I went hard early on and with ten kilometers to go I had a five minute lead.

“Unfortunately I got a bit lost though, which I thought was going to cost me, but luckily I managed to stay in front and it was great to get the win in the end,” he added.

There was plenty at stake ahead of the starter’s gun firing as the race for this year’s Quattro ROAG Series title nears completion and the sport’s racing snakes seek valuable last minute log points.

Having only completed three series races prior to the Tour de Krantz, Kargo Pro MTB Team’s Davids was desperate for a positive result in order to keep his mathematical chance of challenging for top honours in this year’s Quattro ROAG Series alive.

Despite doing all he could on the day though, Davids’ move to keep himself in the running for the series crown was carefully marked by triple series defending champ Andrew Hill who crossed the line in third place behind Davids and Team Thule’s Tyronne White.

“Coming into Sunday’s Tour de Krantz I knew I just needed a top three finish in one of the remaining three races to have enough points to get ahead of Brendon (Davids) on the ROAG Series log,” said TIB Insurance’s Hill.

“It was also quite nice not having to push for the race win in order to stay in the mix for the series title, especially with the legs being pretty loaded after all the training ahead of Hill2Hill and some of the season’s big stage races that are coming up.”

With Davids’ hopes dashed, the battle for the overall men’s spoils has been narrowed down to a two horse race as Hill now looks to fend off White’s late charge after his recent return from injury.

“It’s a bit of a bittersweet situation now,” said Hill.

“Tyronne is obviously a good friend of mine and we’re going to be doing some stage races together shortly so from that perspective it is great to see him improving and putting in some really good performances again.

“On the other hand though, it would be great to win my fourth consecutive ROAG Series!” he laughed.

The women’s race saw Dreyer – fresh off her record-breaking effort at the 900km Colorado Trail Race, USA – unchallenged at the front of the race as the USN/Hi-Tec star claimed her fourth race victory of this year’s Quattro ROAG Series.

With 400 points now to her name and just two races to go, few would bet against Dreyer clinching the women’s series spoils for 2015, despite Jowett Cycles’ Natalie Bergstrom still topping standings on 424 points.