It feels like I have been living under a rock for not knowing about this trail race previously. Best I can do now is to spread the news to the rest of the world. If you think Ironman registration is big, this is much bigger! On an Island 45 Km’s wide and 63 Km’s long, I have just been in the longest que ever to register for a race. How 5500 athletes, give or take, rock up on an island this small to do such an arduous race is hard to comprehend. And it is very motivating too, because all shapes and sizes lined up. If they can do a run that takes much, much longer than the Comrades marathon to finish, then so can I. And so can you. That is what I want to believe!
Veronique, the very helpful lady that coordinated my trip to Reunion Island, spared me the nightmare of an hour’s drive on the “wrong side of the road” by offering me a trip to Saint Pierre, where the registration for the Grand Raid Trail Race takes place. It is hot here, and I cannot imagine running from 04H00 till sunset and maybe longer, in two days time. But as I mentioned earlier, sharing the registration que with young and old, tall and short, but mostly thin people, makes me want to believe I can do this. 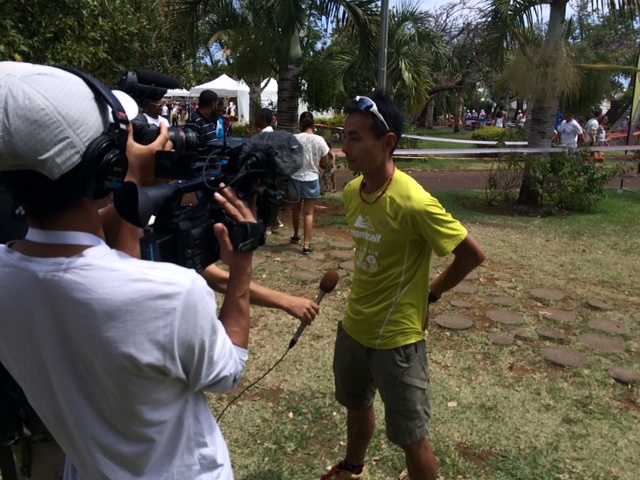 Other than the age groupers, there are several serious looking pro runners getting TV interviews and dope tests. Their physical form is very intimidating and they seem to be better conditioned than thoroughbred race horses. I would give a lot to be a gecko on a rock to feel the energy seeing they fly through the trails.

With registration done, athletes walked past a designated line of sponsor gazebos and filled their bags up to the brim with “goodies”. Then it was off to the press meeting. The only problem once again was that all of it was in French, leaving me rather clueless. But luckily you don’t have to understand much to appreciate this race, you just need to feel the vibe: it is big! 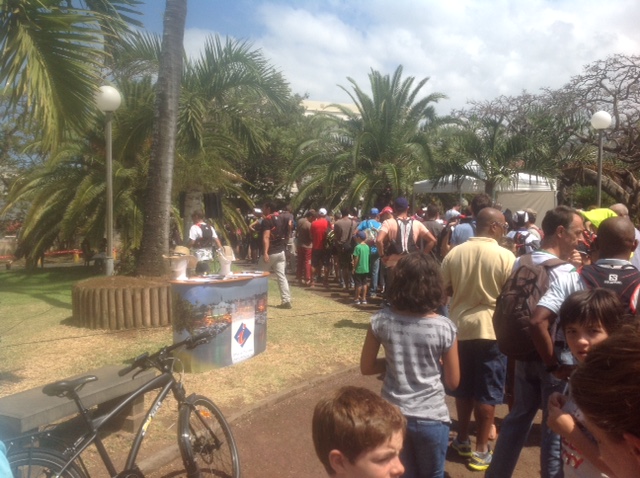 On Thursday night, one hour before midnight, the 165 Km race starts, and 5 hours later I will join the trails with the 67 Km race. I hope to finish it in 15 hours or less, but only time will tell, because I have absolutely no idea what I am up against in terms of the route and even more so, the humidity and heat. Pacing and gauging myself against other runner’s efforts will be part of the game plan, but let’s not get ahead of ourselves!

One day to go. Race face on…

Follow Frank Smuts and Enduro Hub as he conquers the 67km Grand Raid Trail race while also covering all the events as journalist.