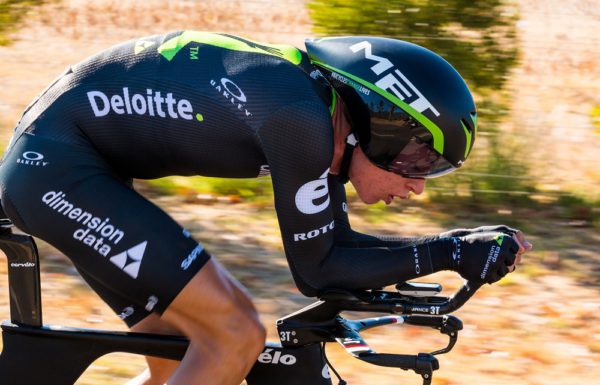 African continental U23 time-trial champion Stefan de Bod capitalised on his skills against the clock to seize the yellow jersey on the second stage of the Bestmed Tour of Good Hope road cycle race at Boland Agricultural High School just outside Paarl today.

The 20-year-old Dimension Data rider, who grew up in nearby Worcester, showed his superior speedwork to win the Buffet Olives individual time-trial in 33:15 to erase an overnight deficit of 54 seconds.

De Bod, who provisionally heads the general classification on 2:55:08, will take a narrow overall lead into the third stage of the five-day, 490km race, which is presented by the City of Drakenstein and Scicon.

Smit sits in second on 2:55:52 and Pro Touch’s Myles van Musschenbroek in third on 2:56:06 with tomorrow’s queen stage, which finishes on top of Du Toitskloof Pass, looming.

Before the race, De Bod had identified the time-trial as a key part of his strategy and he was satisfied with the outcome.

“I felt comfortable during the ride, but I would have liked to have gone a little bit faster,” said the defending champion.

“But that is part of the game and I’m still happy with my result.”

With the course reduced from 37km to 26km this year, De Bod said he knew he could go “full gas” from the start.

“The route is a bit hilly but it’s fast, with long descents and nice rollers.

“Being a bit shorter does make a difference because I normally start my first 10 minutes quite controlled before increasing to maximum effort. But the distance allowed me to go from the start.”

Being a specialist in the discipline, De Bod said the time-trial played an important role in his tour strategy.

“You always want to try to make as much time as possible on the GC contenders,” he said.

“There was a bit of a wind on the road towards Paarl and then coming back there was a crosswind, which was a bit tricky with a disc wheel.

“However, coming to the finish the wind helped me and I was happy with my power.” 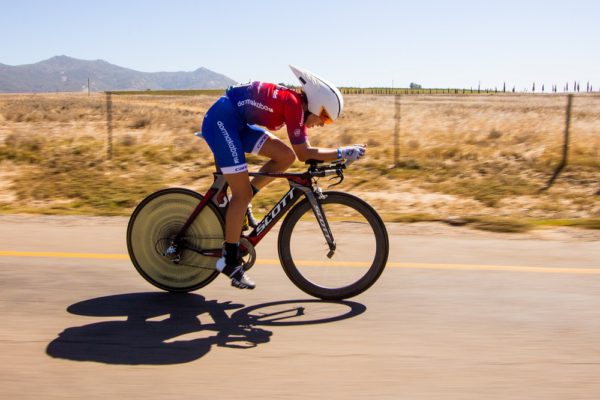 Candice Lill, of Dorma Karma, overcame a lack of experience to take the honours in the Buffet Olives individual time-trial at the Boland Agricultural High School just outside Paarl today, claiming the yellow jersey on the second stage of the Bestmed Tour of Good Hope. Photo: Robert Ward

Despite her relative inexperience as a time-triallist, Dorma Karma’s Candice Lill took the honours in the women’s race in 39:50 to move into the overall lead.

She was followed by Namibian team-mate Vera Adrian, who clocked 41:45, with Chanel Mason of Café Riders third in 42:07.

Having not done many time-trials, Lill said she had been guided through the process by her coach and husband, Darren.

“He basically taught me the details of how to pace yourself and the position on the bike, so I listened to that as much as I could.

“Also, I have done a lot of mountain biking where the kind of effort needed is very similar to that of a time-trial. So I knew I could do well if everything went according to plan.”

The 25-year-old from Sun Valley in Cape Town said she had found the stage a bit harder than expected.

“But that is what a time-trial is all about and I’m happy with my effort.

“I had no real expectations going into the stage and not much idea of the other girls’ ability. All I could aim for was to put in my best effort and I managed to achieve that.”

The Bestmed Tour of Good Hope finishes in Paarl on Friday.