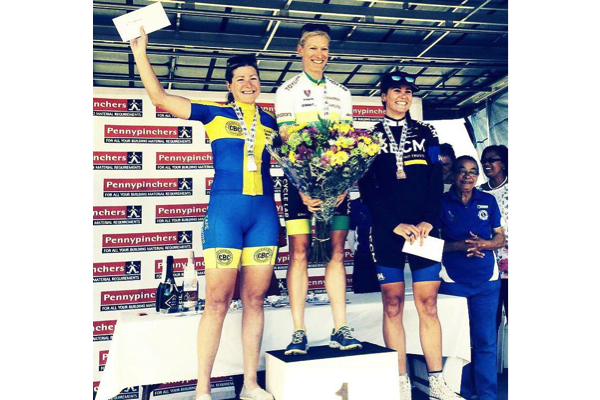 De Groot clocked a time of three hours 29 minutes 18 seconds, just over a minute ahead of Swedish national marathon champion, Jennie Stenerhag (Cape Brewing Company). Former South African marathon champion, Cherise Stander (RECM), rounded out the podium places.
It’s the first time De Groot has won one of the country’s oldest mountain bike marathons, which starts at Uniondale in the Karoo region and ends at the coastal town of Knynsa. The 100km race route gradually descends from a height of 700 metres above sea level with 1525 metres of total ascent and is known for its stunning scenery as it connects the two eco-regions.
After finishing second in her first attempt at the event last year, De Groot used the experience she gained to her benefit in the popular point-to-point race, clocking a time five minutes faster than she did in 2013 – in similar conditions.
“Last year I did too much work on my own and was rather empty in the finale. This year, I rode a lot more tactically and used the bunches that form along the route to save my energy for the finale,” explained De Groot.
“I actually got away from the other women on the very first climb, which has quite a loose, tricky surface, but Jennie caught me on the descent and it was then that I realised I need to use the shelter of the bunches as best I can. I reached the last climb with a bit of something left in the tank this year and I put in a surge, which allowed me to get a gap on Jennie.
“For the final eight kilometres it was a pursuit situation. Jennie was fighting really hard and when I looked back, there were times where I thought she might catch me. But there was a bit of a head wind on the last exposed section into Knysna and I managed to maintain my advantage to the finish,” smiled De Groot.
De Groot and Stenerhag won the PE-Plett stage race last Tuesday and are preparing to team up again for next month’s UCI-graded Bridge Cape Pioneer Trek seven-day stage race.

“The Cape Pioneer Trek is a big goal for us. The UCI points are attractive, the prize money is good and the event is very challenging. We’ll be up against a strong international field there so races like PE-Plett and Karoo-to-Coast are good preparation events for that,” said De Groot.

De Groot adds the Karoo-to-Coast title to MTN Dullstroom Marathon, three Nissan Trailseeker Marathons and the South African Marathon Championships to her list of significant one-day race wins for 2014. She’s also won PE-Plett and Sani2c stage races with Stenerhag this year and placed sixth overall at the Marathon World Championships.
“It’s been a really good year for me so far. I wouldn’t be able to put in the kind of commitment and time required were it not for my primary sponsors Biogen, Toyota and Cycle Lab. They’ve believed in me and helped me achieve more than I could have imagined at the start of this year. Hopefully I can end the year on a high note,” smiled De Groot.
Biogen Toyota featured K2C Karoo 2 Coast 2014 Knysna Pennypinchers Robyn de Groot 2014-09-22
Tiaan Pretorius