Death before DNF – when things don’t go as planned 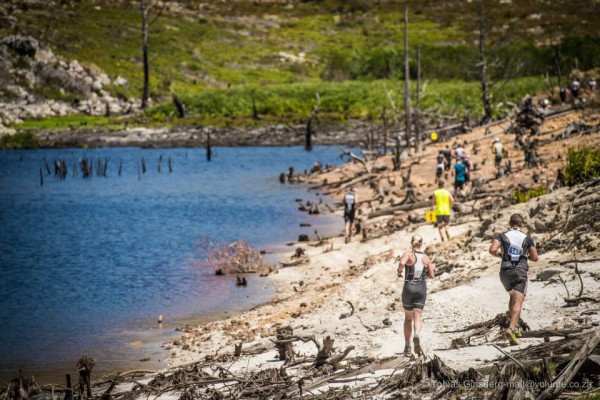 My Totalsports Xterra Grabouw race didn’t go as planned and that is why I am going to make a point of writing about it. I don’t think I’ve had to write about a bad race yet, but the truth is that they happen so I am not going to shy away from it. This race was actually a huge disappointment, but things don’t always turn up roses and we, as athletes and human beings, need to learn to deal with disappointment and take the good with the bad.

I was actually looking forward to racing Xterra Grabouw. For the first time ever. I have done the race twice before, but both times I could barely ride a mountain bike. The bike route is very technical, lots of singletrack and lots of rocks. Lots of places to make mistakes. My goal in the previous two years was just to survive the race. This year I knew that my MTBing skills were much improved and I made a point of riding the route a number of times before the race, ironing out some issues and getting faster on all the technical sections (Strava told me so).

After a good race at Xterra Buffelspoort, my coach and I decided to focus on MTB skills and my run as we felt that these were the two areas which would provide the biggest bang for my buck at Xterra Grabouw.

The Grabouw MTB route is almost one where a slightly less fit or strong rider can hide because there are so many technical sections. A skilled MTBer could make heaps of time on someone who is slower on the singletrack.

I trained well, I tapered well. I was feeling confident that I could tackle the MTB route after about 5 pre-rides of the route. Alas, performing well on the ST under pressure is clearly something else entirely…

And know this. If something is going to go wrong, then it will go wrong on race day.

We had all been expecting a non-wetsuit swim. The water in the Eikenhof dam had been hovering around 24/25 degrees for the past 2 months. Unfortunately, some cold weather the day before the race apparently caused the temperature to drop, making the swim wetsuit legal. And all the non-swimmers shout hallelujah.

I am never too stressed about an Xterra swim. 20sec faster or slower is neither here nor there. The water was very choppy and I slowed my stroke rate and lengthened my pull to compensate for the waves. I had a good swim, exiting the water as the first individual age-group lady, also having overtaken a number of the pro women, despite their 4min advantage at the start.

Race day is always very different to a chilled ride of the route. There are people on the trails around you and they make mistakes that can affect you. I guess that part of being a good MTBer is being able to deal with this and the added pressure.

So I will quickly highlight the major incidents of the MTB:

On one of the STs someone had a mechanical and stopped in front of me, hopping off his bike and clipping my handlebars. Whoops! On the ground. I lost the pros who I had in my sights.

On a section called Forest Twist, the gels that I taped to my top tube slid to the side and were in the process of tearing off. I tried to rectify this and looked up just in time to find myself heading straight for a tree. At speed. I think my eyes grew twice their usual size as I ploughed straight into it. Sorry to the people who I caused a delay. I really didn’t mean to crash.

My chocolate caffeine gel had torn off, but there was no way I was leaving it. I needed that caffeine boost later. So I grabbed it and stuck it under the leg of my new TYR trisuit. Obviously it was open and immediately started leaking on to my leg. Great. I gathered my bike and tried to gather my wits and got back on the trail.

I must have fallen twice more. My bloody knees tell the story, but the major issue of the day happened at the beginning of the rock garden.

Being a bit of a nervous rider, having people put pressure on me from behind through a technical section is likely to make me stress out and crash. At one section that I wasn’t confident I unclipped to let some people through. Once they were through I then fell to the other side – the side that was still cleated in. Not too terrible, but after disentangling myself I found that somehow my shifter (my one and only shifter) had broken off from the handlebar. Eish. I tried wrapping the dangling shifter around the other cables, but its cable was too short and I figured that I needed to hold it in my hand. So now I was gripping the bar and the brake and trying to hold to the shifter in my right hand while navigating the rock garden. Not ideal, but somehow I got through it without falling again. Once out of the rock garden I realised that I now had a single speed. And I was in my granny gear. But there was no time to sort it out as I entered the next piece of singletrack, which, luckily, was uphill.

I kept on dropping the shifter as I couldn’t get a proper grip on the three things in my right hand. At one point I moved the shifter to my left hand and managed to drop three gears which would be sufficient to get me to the end of the bike. But there was still more singletrack to navigate and still I couldn’t hold the shifter.

Somehow I got myself back to transition, downed the gel which had, by now, leaked all over my trisuit, got my feet out of my shoes, dismounted and ran to my bike rack.

Running out of transition my legs felt okay. My mom was running in a team and she left transition shortly after me, catching me about 500m into the run. We had a quick chat, I related my MTB woes and then she ran off. I figured something was wrong when I realised that the girl ahead of me, who I should have been running down, was actually running away from me. I wasn’t sure exactly what was wrong, but something wasn’t right. My legs were just not cooperating, they were not going at the speed they should have been.

The thoughts that go through your head at times like these are quite strange as you try and analyse what the problem is. Is it my head? Is it my legs? Is it my lungs or is my stomach upset. I couldn’t figure out how to make myself go faster, just nothing was happening.

And then when people you know start passing you and ask whats wrong and tell you to “RUN, ROBYN!” you realise that something is very off.

But I kept on expecting things to turn around. I kept on trying to convince my body to go faster, but it just wouldn’t. When a friend passed me, one I never thought would ever pass me, I considered stopping. People would understand that it really just hadn’t been my day. But I have never before quit a race. Not even when I was tripped at the start of a cross country race and ran 6km with a broken navicular bone in my foot to still make the WP cross country team (needless to say I couldn’t race SAs, being in a moon boot for three months). So no, stopping was not an option.

But getting to the finish line was hard. It was a real struggle. An internal struggle with my body as I willed it on. And I was already starting to deal with the disappointment of the day. I had so wanted to win my 25-29 age group. I wanted to win the coveted SA champ cycling jersey. But it was not to be in 2015 and I need to wait another whole year before I get a chance to make amends. As it was, I fell just 90sec short of my top-step podium goal, beaten by my very good friend Amy. We both qualified to race Xterra World Champs in Maui. I could not have asked for a nicer person to beat me.

And that’s the way the cookie crumbles. Sport is cruel. It doesn’t always go the way you want it to, but you deal with it and you learn from it. On the plus side, even though I had so many mishaps on the bike, I still managed to take 16min off my bike time from last year. So I have improved. Next year I will be even better technically. My Specialized Epic dual sus was the perfect bike for the route. Watching other girls struggle over the rocks I realised what an advantage a dual sus was over a hard tail.

And a bad race is definitely not the end of the world. After passing me, my mom twisted her ankle at 3km. She then proceeded to run the next 9km with a BROKEN distal fibula lateral malleous and torn ligaments to take her team to second in the ladies category. She is super fit and was supposed to race SA Long Distance Tri Champs this weekend. Instead she’ll be spending the next 10-12 weeks in a moon boot. Very, very disappointing. It puts a bad race in perspective, but a broken foot is also not the end of the world. We are still ridiculously privileged and there are other things of more importance than just sport.

Massive congrats to the winners, Stuart Marais and Flora Duffy, on absolutely world class performances. Xterra could not ask for better ambassadors for their sport as these two are true champions in every sense of the word.

And to everyone who completed the race, whether you did it in 2h30 or 5h30, you are an Xterra Warrior. And that is a hard-earned title. Congrats.

The Stillwater Sports organising team put on, arguably, the best Xterra event in the world. The race is flawlessly run, with many stocked waterpoints, fantastic, well-marked routes and a great vibe at the finish. You know what you’re paying for when you enter a Stillwater event.

I will be back next year for another attempt.