Defending champ on a mission at Tour of Good Hope 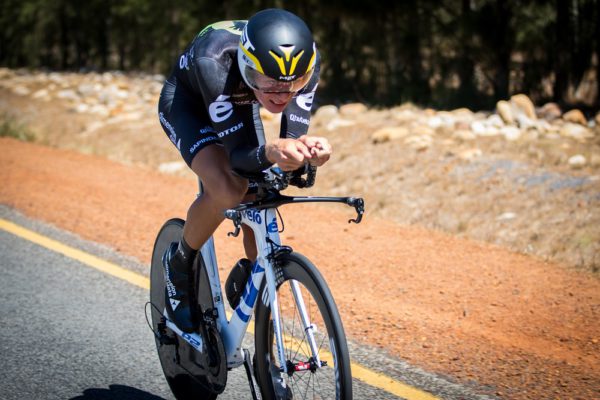 Returning to a region he knows intimately, champion Stefan de Bod is fired up to defend his title when the Bestmed Tour of Good Hope takes place in the Cape Winelands next week.

The 20-year Dimension Data rider, who grew up in Worcester in the Western Cape, described the Cycling SA-sanctioned event, presented by Scicon and the City of Drakenstein, as “a very special race”.

“It is in the heartland of where I grew up and trained daily, as well as now when I’m in South Africa, so this will always be special to me,” he said.

De Bod has already laid down a marker for his opponents, winning the national U23 road and time-trial titles in Wellington last month, followed by the African U23 time-trial title a week later.

Having won the Buffet Olives time-trial in last year’s Bestmed Tour of Good Hope, De Bod said it could again play a critical role in the final outcome.

“I had a good time-trial last year and made enough time on the other riders to defend the yellow jersey comfortably with a great team behind me,” he said.

“The time-trial will definitely be an important stage in this year’s tour and I would like to win it again.

“After the time-trial (on day two), we’ll have to see who are contenders for the general classification and plan the strategy for the rest of the tour.”

This year’s time-trial route, which boasts a total ascent of 283 metres and has been shortened from 37km to 25km, will take place on the quieter roads in northern Paarl.

Reflecting on last year’s overall victory, De Bod said it was one of the biggest victories of his career at that stage.

“I had great support last year and the team really enjoyed the tour. I’m looking forward to defending the title this year.

“Winning the Tour of Good Hope was a good start to the season on my home ground after three months of base training. It was definitely a boost for my confidence.”

Following his Good Hope victory, De Bod spent time racing in Europe and said it had been an eye-opening experience.

“Racing in Europe was completely different for me,” he said. “I struggled at the beginning to find my feet in the big European pelotons but got used to it after a while.

“I’ve learnt that you need to fight a lot more for a position in Europe and not to be intimidated or scared of the well-known professionals.

“The year was just an unbelievable racing experience and I learnt a lot about myself and cycling.”

He added, however, that the year was marred by an accident in Italy when team-mate Keagan Girdlestone, who helped De Bod to last year’s Tour of Good Hope victory, suffered serious injuries.

“That was a very difficult incident to deal with on a personal and team level. He played a big part in my victory last year and I will miss him.”

However, De Bod is confident they will be able to compete next week even though they have a new-look outfit.

“It will be the first race we do together, but I believe we have a strong team.”

He acknowledged there would be plenty of competition, identifying RoadCover rider Willie Smit as one to watch. The Nelspruit ace showed his form recently by winning the road race title at the Continental Championships in Egypt.

“My teammate Nicholas Dlamini will also be in the mix and there are always a few strong international riders to watch,” said De Bod.

Among them are European mountain bike stars Karl Platt and Christoph Sauser, who will be going head to head the week after the tour in their respective bids to become the first six-time winner of the Cape Epic.

The Spur rider should be tested by Lise Olivier, who was runner-up to Luthi two years ago, and Bestmed-ASG’s An-Li Kachelhoffer, who took silver in the national road race championships.