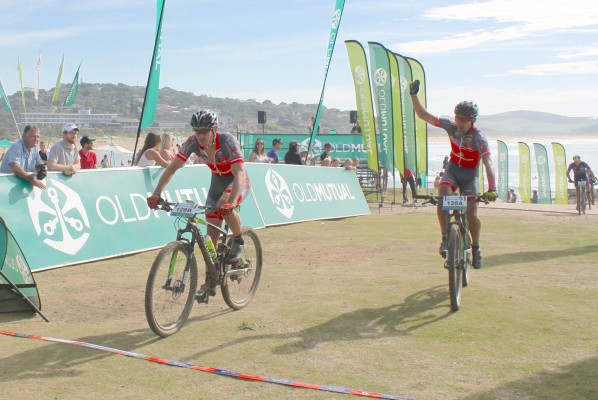 Defending champions Gawie Combrinck and Johann Rabie swept to their second straight victory in the nine-day Old Mutual joBerg2c at Scottburgh on the KwaZulu-Natal South Coast on Saturday.

The EAI Cycling duo took half a dozen stage wins, including the final stage, en route to overall honours in the sixth edition of the 900km mountain bike race for a combined time of 34:38:51.

Day seven winners Hanco Kachelhoffer and Pieter Seyffert, riding in the colours of Altech Autopage Karan Beef, fought all the way to the line but failed to narrow the almost 20-minute time gap to settle for second in 34:58:11.

Former winner David George and new partner Justin Tuck rounded out the general classification for The Gear Change in 35:14:06.

Combrinck said he and Rabie were delighted with their result after a busy start to their competitive calendar.

“We’ve done a lot of racing this year so far, so winning joBerg2c again is a really nice way to round off the first half of our season.

“This is a very special race. There aren’t many events that go from the middle of the country all the way down to the coast.”

After departing Jolivet Farm near Highflats on the final day, the three lead teams stayed together for most of the 84km route as they rolled through sugar cane plantations down towards the sea.

When Rabie suffered a mechanical halfway into the stage, he and Combrinck were forced to chase back hard until they closed down their rivals again.

The two were first out of the singletrack as they hit the beach but a slight navigational miscalculation put them, followed by Kachelhoffer and Seyffert, on the alternative chicken run around Scottburgh Lagoon instead of the floating bridge across it.

The champs nevertheless had enough time in hand and were able to race into the finish first in 2:48:26, just five seconds clear of Kachelhoffer and Seyffert, with George and Tuck trailing them home across the water in 2:50:53.

“We weren’t going for the stage win today,” said Combrinck.

“We just wanted to make it here safely, so we’re glad it worked out.”

In the women’s race, two-time winner Catherine Williamson notched up her third triumph alongside new teammate Yolande de Villiers after winning the final stage in 3:05:33.

The SasolRacing duo did not drop a single stage as they powered towards an uncontested overall victory in 38:33:35.

Williamson said she was “over the moon” with her trio of wins and amazed at her teammate’s strength.

“It’s my favourite race and it couldn’t get any better now that I’ve had my third victory,” said the British racer.

“I want to keep coming back here every year – it’s got such a great vibe and to win is the bonus.” 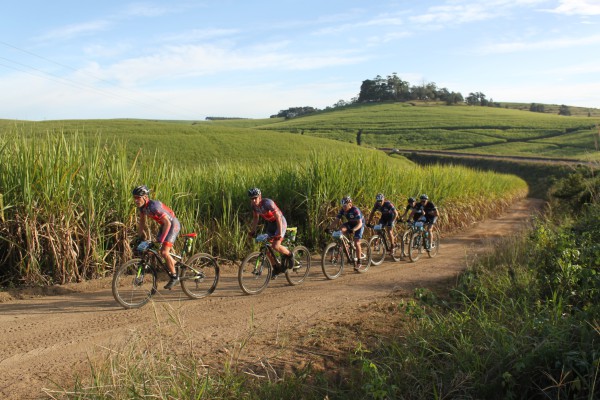 Overnight leaders Stelling and Buchacher eventually stormed into the finish to take the stage and the top spot in the standings in 3:02:41 (39:01:21).

“We just fought and fought. There were some nervous moments there and five kilometres from the finish we nearly went down,” said Stelling.

“Carmen’s been sick throughout the week but she’s shown great courage. It’s never in the bag until you’re over the line, and we’re so chuffed.”

HiddenHunger’s Sean Henderson and riding mate David de Lima, who rode with broken ribs after crashing in the earlier stages, showed their class to take the veterans’ category in 3:04:13 (39:01:37).

In the solo race, Timothy Hammond of Ultimate Cycle Base in Botswana was pipped on the day by Dorma’s German rider Nico Pfitzenmaier. He trailed Pfitzenmaier by three seconds in 2:52:11 but his substantial overall lead kept the title in his grasp in 35:33:34.

Paula Hardy took the women’s competition in 43:27:58, after finishing second on the day in 3:36:15, five minutes and 20 seconds behind Germany’s Gabriele Forster.

Blind Kenyan rider Douglas Sidialo and his tandem pilot John Mwangi, who broke his collarbone after crashing on the penultimate stage, showed their grit as they completed their 900km journey.

The pair received a heroes’ welcome from the crowds who gathered on the beach and the race’s Paolo Beltramo memorial award for courage in the face of adversity for their efforts.