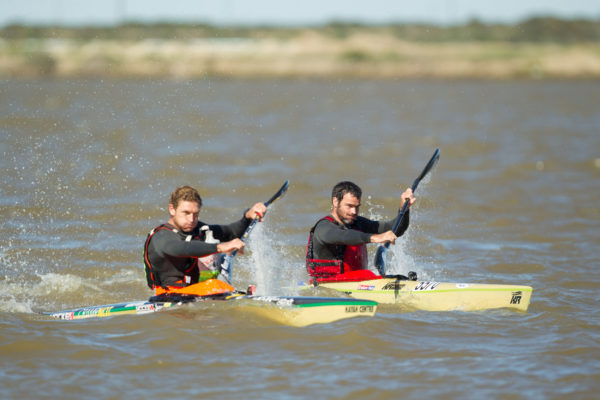 It was another end sprint that decided the final stage honours as Euro Steel/Kayak Centre’s Hank McGregor outsprinted Simon van Gysen for the honours on the fourth and final stage of the 2016 Berg River Canoe Marathon into Velddrif on Saturday. John Hishin/
Gameplan Media

Velddrif – Hank McGregor entrenched his status as the undisputed champion of the Berg River Canoe Marathon by wrapping up a tactically brilliant overall victory while Bianca Beavitt defended her women’s title in a gusty display of determination when the race ended in Velddrif on the West Coast on Saturday.

Holding a seven minute advantage going into the final stage McGregor knew that it would take a monumental mistake to derail his pursuit of an eleventh Berg title. The Euro Steel/Kayak Centre ace put in another calculated performance and took a clean sweep of stage wins and an eleventh win in thirteen starts.

“I’m not really one for stats and every race that I win has got a special place in my heart especially with it being my son’s second birthday [on Saturday],” a satisfied McGregor mentioned.

“I am really happy with the four days, I won all four stages and all of the bridge prizes which is great.

Despite very rarely being on his own throughout the race, McGregor managed to slowly carve out a lead from the time trial to the finish in Velddrif and without putting a foot wrong the eleven-time winner re-wrote the record books once again in 2016.

“Someone said that it was my 33rd stage win today which is great for the stats book but having my family here to enjoy it with me was far more important.

“Having my wife and my son here along with my mum and dad was great!” an appreciative McGregor added.

McGregor was joined on the podium by Simon van Gysen who produced a solid all-round performance to take the silver medal despite mentioning that he felt that he was not fit enough before the race started.

The strong international contingent fared well in the low river conditions and all finished in the top ten overall with Hungarian World Marathon K2 champion Adrian Boros finishing as the best placed in third with Czech star Petr Mojžíšek in sixth and Australians Brendan Rice and Josh Kippin in seventh and eight respectively.

“I really enjoyed the four days although I battled in the first two days due to my size and not knowing the river well,” Mojžíšek commented.

“I am a big guy so I battled through the trees and all the corners look the same! The last two days were so much better for me because I am a flat water paddler so I felt more comfortable on the river.

“The race is fantastic and I hope that I can come back and do it again,” the former Marathon silver medallist said with a smile.

The ladies race was an entertaining affair despite Century City/Pink Lady’s dominance of the overall title as Nikki Russell put in a concerted effort to shake the defending champions lead. Beavitt was equal to Russell’s attack on Saturday as she proved her worth and took a third stage victory and with that the overall half an hour victory.

“I was feeling strong before the start yesterday but when I got onto the dam it hit me and I didn’t feel well at all so today I said to myself that I must take it as it comes and just get to the finish!

“Yesterday was a disappointing day for me because when I got to the finish I felt like I had so much more in the bag but I couldn’t give it my all.

“This year’s race was easier I think, we had far more tree blocks last year and the race was more technical but the major downside this year was finishing into the current here as the tide was coming in,” she explained.

The women’s podium was completed by Under 23 star Jenna Ward who was her consistent and dogged self throughout and despite not registering a stage win managed to consolidate her place on the podium.

The Under 23 titles went to Jenna Ward and Thomas Lovemore. Lovemore produced a consistent four days of racing that saw him finish thirteenth overall ahead of Tyron Maher, who ended in fourteenth overall, and Anders Hart in third.

The junior race was an exciting one as Hamish Lovemore came out on top despite Emanuel Zaloumis’ best efforts and the impressive Kyeta Purchase, who was the only junior girl in the race, finished in 42nd position overall.

Giel van Deventer extended his record for the most Berg finishes with his 45th Berg medal, while Edgar Boehm added to his record tally of uninterrupted Berg finishes. The race lauded 76 year Jannie Malherbe, who was part of the first ever Berg River Canoe Marathon 55 years ago, when he won the Super Grand Masters prize.