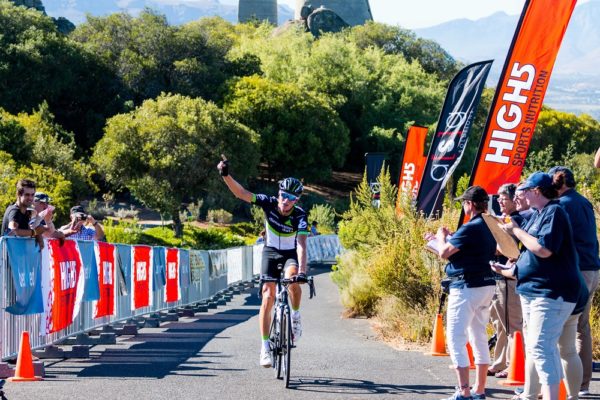 Bestmed Tour of Good Hope 2016 champion Stefan de Bod will be a key member in the Dimension Data for Qhubeka Continental Team when South Africa’s premier stage road race takes place in and around Paarl in the Western Cape from March 5 to 9. Photo: Robert Ward

With two champions in their line-up, the Dimension Data for Qhubeka Continental Team are eager to show their credentials when they tackle the Bestmed Tour of Good Hope road race in the Western Cape next month.

Current title-holder Kent Main and 2016 winner Stefan de Bod are two of their standout riders, but manager Kevin Campbell said there would be a heavy emphasis on teamwork during the five-stage event.

Rated as South Africa’s premier stage road race, the 491km Tour of Good Hope, presented by Scicon and the City of Drakenstein, will take place in and around Paarl from March 5 to 9.

Main, then riding for RoadCover, took the title in a sensational finale at the Taal Monument last year when he edged Myles van Musschenbroek by one second for the top podium spot.

Based most of the year in Italy, Campbell said they were excited to be competing in one of the country’s leading cycling events.

“We do not race in many events in SA and we are delighted at this opportunity,” he said. “We want to show we are a strong team with a depth of talent.”

He added that the most important element for them would be to work together.

“Good individual riders will not be able to win this event without a strong team working well behind them,” said Campbell.

“This is an unpredictable race because the weather can change daily.

“The heat is always a factor and there are strong riders from foreign teams who can add an element of surprise to this event.”

Operating as a Continental team, Campbell said they had 12 team members overall.

“We are based in Lucca, Italy, for eight months of the year and our racing programme consists mostly of UCI Elite and U23 events, the majority of which are in Europe.”

He said the overseas riders brought a different international racing experience with them.

“They have already shown that they are talented performers and I’m sure they will add a fresh element to the team.”

Emphasising their eagerness to do well, Campbell said they wanted to start their season on a winning note and to carry that momentum through their programme.

“It is an early season event for us, but Louis Visser competed in an U23 Nations Cup event in Cameroon recently and all three of our SA riders took part in the national road champs.

“While the road-race result in Oudtshoorn did not go as planned, the three SA riders are in good form.

“Our three foreigners are all competing in their first events for 2018 but I know they are hungry for early-season success.”