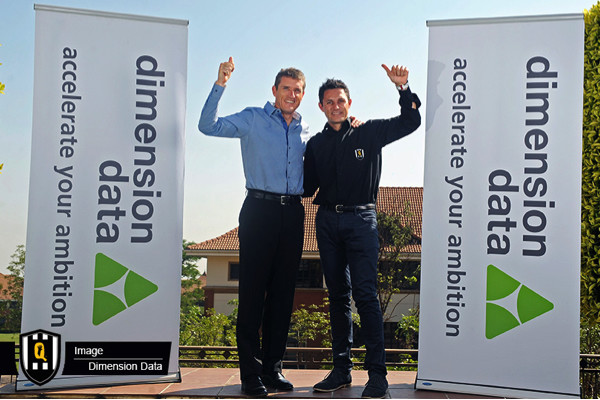 Team Dimension Data will be the team’s new name

We are extremely happy to announce that Dimension Data, the global ICT solutions and services provider, will become the new title partner of Ryder Cycling, which owns and manages Team MTN-Qhubeka p/b Samsung, Africa’s only UCI Professional Continental Cycling Team. Effective 1 January 2016, the team’s new name will be Team Dimension Data.
The team made history this year as the first African team to compete in the Tour de France alongside five other wild-card teams. The team’s tremendous successes in the race included:

Douglas Ryder, Team Principal said, “We are incredibly excited to have Dimension Data become our new title partner. It enables us to continue to support the development of African cycling and the Qhubeka charity at the highest levels in world cycling. Cycling is such a high tech sport, and we’ve leveraged technology and data through our high performance team to build the bridge from racing in Africa to competing successfully against the best in the world on the global race calendar. Partnering with Dimension Data supports us more in this area, and will also help us be more connected with our growing fan base around the world. This is the next step in our journey and we look forward to accelerating our collective ambitions through this partnership.”

Brett Dawson, Dimension Data’s Group CEO said, “Dimension Data is proud to become the new title partner of this amazing African team. We’re a global technology organisation, and because the team leverages technology – both on and off the bike – are joint goal is to take the team and African cycling to new heights. In addition, we want to help develop African riders into professional cyclists who will compete in some of the greatest cycling events on the African continent and across the world.”

Adam Foster, Dimension Data’s Group Executive – Communications, who is responsible for the Amaury Sport Organisation (A.S.O.), which owns the Tour de France, and the Ryder Cycling relationships said: “We will work closely with Doug Ryder, his team, and its other partners to provide world class infrastructure, services, and race opportunities for the team’s riders to be successful. Our partnership, combined with harnessing the power of our technologies to drive transformation within the world of cycling, will help the team accelerate their individual and collective ambitions.”

Dimension Data also confirmed it will continue to support Qhubeka and World Bicycle Relief’s initiative to put more children across the African continent on bicycles, and raise funds to purchase bicycles during the period of the partnership.

Dimension Data is also the Official Technology Partner of A.S.O., and was responsible for processing and analysing the data collated from the riders via sensors located under their saddles at this year’s Tour de France. Through its beta live tracking site, millions of fans were able to follow the race and their favourite riders real-time for the first time. Over five million records were processed during each of the 21 stages, while 664,000 fans visited the race data site during the course of the tour.

Founded in 1983, Dimension Data plc is an ICT services and solutions provider that uses its technology expertise, global service delivery capability, and entrepreneurial spirit to accelerate the business ambitions of its clients. Dimension Data is a member of the NTT Group.
www.dimensiondata.com.

Ryder Cycling founded Team MTN-Qhubeka in 2007, steadily working its way up from a regional team to now being a Continental Pro team with bases in South Africa and Italy. The team rides for a purpose to assist in developing cycling on the African continent with the goal to give talented African riders a path into the pro peloton while raising funds for the Qhubeka Charity. In 2015, Team MTN-Qhubeka p/b Samsung created a campaign to help them mobilise 5,000 kids on bicycles. To contribute to the #BicyclesChangeLivesCampaign, click here.