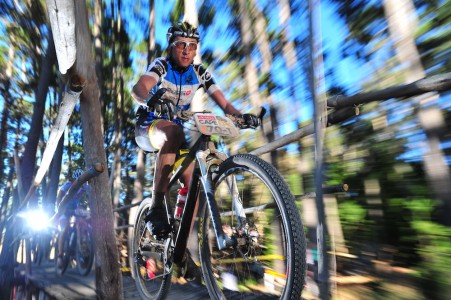 The world’s foremost mountain bike stage race announced on Friday that the Dimension Data’s role as a headline sponsor would be extended to sponsoring the jersey.

“It’s great that Dimension Data have come on board as the Masters jersey sponsor,” said Bart, who also won the Absa Cape Epic overall in 2005 and has won the Masters category twice. “The category has become more and more competitive. It’s the biggest category and the level of competition is as high as the elite men … just at an older age.”

Last week it was announced that Dimension Data had joined the Absa Cape Epic as a headline sponsor.

The internationally-renowned IT infrastructure provider will be the Official Technology Partner to the Absa Cape Epic. It will handle all technology and communications aspects related to the race, including supplying equipment, personnel and support to deliver the IT service.

Absa Cape Epic founder Kevin Vermaak said: “We’re extremely excited that Dimension Data has come on board as the Official Technology Partner for the Absa Cape Epic. We were looking for a partner with proven capabilities in providing IT communications in environments that require a high level of robustness and reliability.”

“Dimension Data’s proven pedigree in providing the type of connectivity that we require to take the event to millions of mountain biking enthusiasts around the world through the media made them an obvious choice to deliver this crucial service,” said Vermaak.

Derek Wilcocks, Dimension Data’s CEO for the Middle East and Africa, said: “This is a race that’s really about the triumph of the human spirit, and as a South African-born company, we have a deep passion for the continent of Africa. This is why we continually invest in initiatives that enable us to accelerate the ambitions of its people.”

“Dimension Data particularly looks forward to showcasing how technology can connect participants and fans in real time,” said Wilcocks. “Adventure sports have become a showcase for new media with millions of devoted followers.”

The eight-day Absa Cape Epic, staged annually in the Western Cape, has become the world’s foremost mountain bike stage race since the first event in 2004. It attracts the world’s leading professional riders and amateurs keen to test their limits in the rugged Western Cape countryside.

Dimension Data will provide Race Village bandwidth and connectivity at all the sites for the media contingent as well as riders, crew, operations and sponsors. This involves providing a seamless service to at least 4000 devices accessing the networks at different route locations over the eight days of the race.