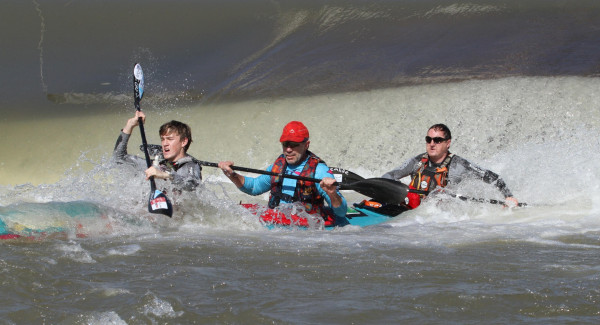 Although burdened with a physical disability Roodepoort resident Constant Olivier (centre) will not that get in his way as he tackles the 2015 Hansa Fish River Canoe Marathon with Michael (front) and Andrew Lake (back) from 9-10 October.

Cradock – With the 2015 Hansa Fish River Canoe Marathon just over a month away, paddlers’ preparation is well underway and it is no different for Gauteng based para-canoeist Constant Olivier who will be tackling the iconic two-day journey from Grassridge Dam to the Sports Fields in Cradock from 9-10 October for the first time.

The Hansa Fish has always been a race that physically disabled paddlers have enjoyed taking part in due to the lack of portaging and fast flowing water. Completing the task is however still an incredible achievement and Olivier has been hard at training on the Highveld with a K3 finish in his sights.

The 55 year-old was involved in a car crash in 1982 which lead to a compression fracture, resulting in paraplegia. Olivier is however not entirely paralysed with pain sensations in his knees and hot/cold distinction down to his ankles giving him some feeling in his legs.

Unable to walk unaided, the Hansa Fish’s few short portages would appear a major obstacle for Olivier however having his two paddling partners by his side will give him enough assistance during the few short walks.

Although Olivier has lived with this disability for a number of years it has not stopped him from taking part in physically demanding events and with his passion for paddling, he recently realised that the competitive juices still flow strongly through him.

“I decided this year that I was going to give paddling a go properly, even though I had tried it before,” a bubbly Olivier mentioned.

With a relatively short paddling career under his belt, Olivier will take on the Hansa Fish challenge with the father and son pair of Andrew and Michael Lake in a K3 following what he has described as a ‘natural progression’ into the river marathon scene.

“I never actually made the decision to paddle Fish this year; I think this year has just evolved into me competing in river races.

“It started with my proficiency, then on to sprints, then onto the river – which just seemed to be the way to go – and then all of a sudden there was talk about paddling Fish.

“After I made sure that I could handle it, the decision was made!” he mentioned excitedly.

The Hansa Fish is one of the most popular river races in the country due to the excitement that paddlers enjoy when taking on some of the large rapids and big water along the route.

Olivier understands the challenges that he might face during the race however is giving himself the best opportunity to be fully prepared for the event.

“I have done so much research on the river and I think I have watched every single Youtube video there is on the Fish,” he chuckled.

“We have been training on the Klip – which is one of our big rivers here in Gauteng – but there will still always be a few concerns going into something that I have never done before.

“With Andrew – who is the KZN Safety Officer – and Michael by my side though, I feel that I am in good hands!

“We will have a bit of time down there on the river before the race starts which I am looking forward to, especially considering we have only paddled one race together.”

Despite their lack of time in the boat, Olivier is confident the trio will form a solid partnership for the race.

“We paddled the Tugela 20 together and we worked well together there.

“We took a bit of time to get going but then it all went smoothly so we should be fine at Fish!”

Although Olivier is giving himself every opportunity to be as prepared as he can be, going into the race there is still a slight air of apprehension.

“I am not going to lie, it is a big river with some big rapids so you are never quite at ease with such a big prospect ahead.

“It means that I cannot be complacent at all going into the race but I feel that that is a good thing and will help keep me focused,” Olivier concluded positively.