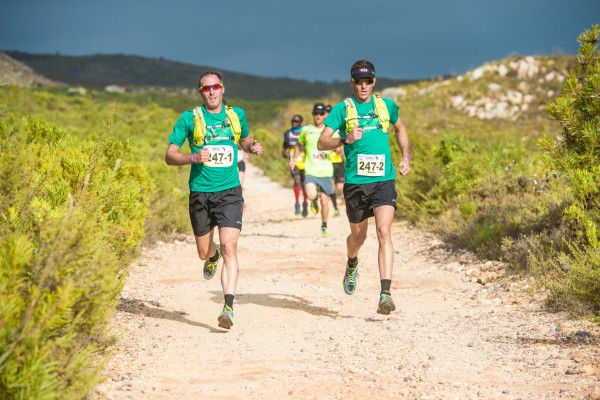 Trail runners wishing to get the most out of the 2016 AfricanX Trailrun presented by ASICS, are invited to join in on the AfricanX training run at Cecilia Forest (Newlands) on Wednesday, 16 December 2015.
Seen here (from left to right): Dawid Visser and Rohan Kennedy in action at the 2015 AfricanX Trailrun presented by ASICS. Photo Credit: Volume Photography

Trail runners wishing to get the most out of the 2016 AfricanX Trailrun presented by ASICS, are invited to join in on the AfricanX training run at Cecilia Forest (Newlands) on Wednesday, 16 December 2015.

According to Dawid Visser, ASICS Promotions and Training Specialist, the training run is open to all runners that have entered or that are still keen to enter the 2016 event. “The AfricanX Trailrun has firmly been established as South Africa’s premier three day stage trail run and is special for various reasons. Not only do entrants get to mingle and run with likeminded athletes, but they also get to spend three days in the company of some of SA’s elite trail runners who are always eager to share important advice. I have competed in six AfricanX Trailrun races.  The experience cannot be likened to any other.”

“The purpose of the AfricanX training run is to give entrants a better understanding of what to expect at the 2016 event,” continues Visser. “ASICS Ambassadors, Nicholas Rupanga and Rohan Kennedy, will be on hand to give trail tips and discuss what type of terrain to expect.  The route chosen for the training run will be between 12km – 15km in length and will feature a combination of compact single track, a bit of jeep track, a few stairs and a few rocks, just for good measure.”

In 2011 Dawid Visser and Rohan Kennedy claimed gold in the men’s team category of the AfricanX Trailrun.

Teams of two (male/female/mixed) will be seen battling it out on a route varying in distance between 22 – 36km each day. The three routes have been planned in such a way that the participants will have the opportunity to tackle a different breath-taking scenic route each day, allowing them to enjoy the full beauty of the Overberg.

Entries are limited to 300 teams.

There are three entry options: