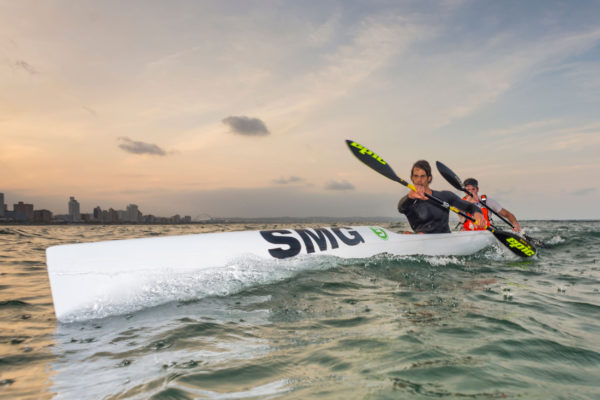 Durban – The Durban beachfront was awash with double surfskis for the uncharacteristic Thursday evening shoot-out at the Bay Union Doubles Challenge – Race Three of the 2017 Bay Union Surfski Series.

Paddlers were appreciative at the juggling around of the calendar following the postponement of the King of the Bay due to large surf two weeks ago, and the numbers at Thursday’s race suggested organisers made the right decision to keep the doubles challenge on the calendar despite having to move it from its traditional Sunday slot.

The action on the water was red-hot with some of the town’s leading surfski paddlers teaming up for a shot at the doubles crown. The unique out-and-back course proved to be a tricky concept for some and with testing conditions and a buoy malfunction the race had excitement aplenty.

“It was such a fun race, something completely different to what we are used to,” said winner Matt Bouman, who partnered up with Wade Krieger.

“There was a massive current coming out of the harbour which pushed the buoy north, meaning we didn’t really know where to go!

“It added to the fun of the event and we all really enjoyed being out competing and having a good time.”

The experienced pairing of Bouman and Krieger were too strong for the rest of the field and outsmarted the Under-23 duo of Bailey de Fondaumiere and Gene Prato with Steve Woods and Luke Nisbet coming home in third.

“Wade and I have been friends for a very long time so it’s nice to hop in a boat with him,” SMG/Epic Kayaks’ Bouman added.

“We tend to have our own little arguments when we are paddling in the same boat but we have a lot of fun together.”

With Durban providing a hub of surfski action throughout the year, the singles battles is normally the focal point, so to move away from that for this race was a welcome change for Bouman.

“I think we need to have more doubles races. It’s nice and refreshing to be in a double ski and fighting it out as teams.

“The course was also something that we are not used to which was a nice surprise,” he added.

In the ladies race, the dynamite duo of Euro Steel’s Kyeta Purchase and Jenna Ward were reunited and they powered to a comprehensive win over Euro Steel team-mates Hayley Nixon and Bridgitte Hartley.

Having missed out to Brandon van der Walt at the recent Bay Union King of the Bay, Euro Steel’s Andy Birkett hopped back into a double ski with Nicole Russell and drove the pair to a solid victory in the mixed doubles category and an impressive eighth overall.

The event also incorporated a short-course race that was won by the mixed doubles pair of Brendon Delport and Lyn Bennett, with the Under-18 mixed pair of Teegan Hardwick and Jasper Gaylard finishing second and Carmel Bilson and Siobhan Sharp coming home in third.

In the ever-popular stand-up paddling boarding category it was Nick Park-Ross who took home first prize followed by Shayne Chipps and then Robbie de Billot.

The Bay Union Doubles Challenge brings the curtain down on another successful edition of the Bay Union Surfski Series. The surfski action does continue, however, with the Bryte Surf Challenge happening on Sunday, 28 May.