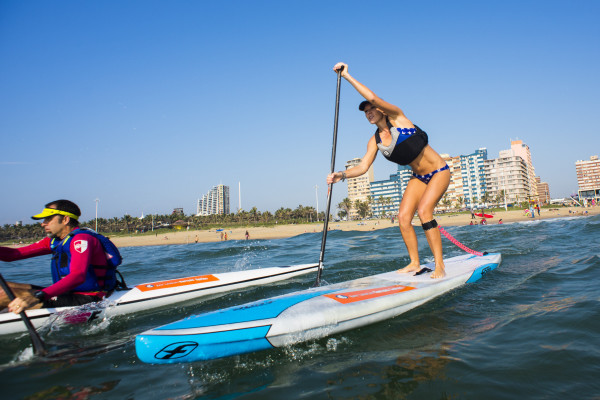 The field of stand up paddleboarders lapped up the conditions at the Bay Union Doubles Race, the fifth and final race of the 2016 Bay Union Surfski Series, as they completed their 7km assignment. Anthony Grote/
Gameplan Media

Durban – Hank McGregor and Lee Furby clinched the win at the Bay Union Doubles Race at Marine Surf Lifesaving Club on Sunday, bringing down the curtain on the 2016 Bay Union Surfski Series while Kyeta Purchase and Tamryn McKie as well as Jenna Ward and Luke Nisbet won the women’s and mixed race crowns.

After the series’ fourth leg was cancelled due to the torrential rains that ravaged much of KZN’s coastline last weekend, the race – previously planned to be a Team Challenge – was changed to race four’s original doubles format.

McGregor (Euro Steel/Epic Kayaks), along with much of the region’s surfski community, relished the rare S2-orientated opportunity and jumped at the chance to tackle the clash with his buddy and fellow Salt Rock resident, Furby before the pair jet off to Hawaii for the upcoming Maui Kim Molokai Challenge.

“Both Lee and I leave for Molokai on Tuesday,” said McGregor. “This is only a fifteen kilometer race and we’ve got to race 52km over in Hawaii but its nice to leave SA with a win and to have enjoyed a solid race with a great friend like Lee was awesome!”

McGregor and Furby were pushed all the way by Epic Kayaks’ Matthew Bouman and sprint star Louis Hattingh with just the final surge for the line the difference between the pairs in the end.

“There were two boats for the last ten kilometres before we managed to get the upper hand for the last kilometer and a half.

“I thought Matthew, with South African sprinter Louis Hattingh in the back, might have had the gas to come past us.

“They tried to do so for the last kilometer or so but we managed to hold them off and so it came down to a wave at the end.

“We had the lead pulling into it and so we hooked the wave while they came off second best,” said McGregor.

Purchase and McKie were unrivalled in the women’s race with the star youngster enjoying the chance to expose the latter to the sharp end of the field for the first time.

“This is the longest distance Tammy has ever raced, so it was great to put her in the back of the double and show her what it is all about.”

The race’s action concludes the five-leg Autumn series backed by Bay Union Financial Series with the next major event on the KZN surfski calendar being the FNB Durban Downwind – a World Surfski Series title event – which takes place on Saturday, 25 and Sunday, 26 June 2016.