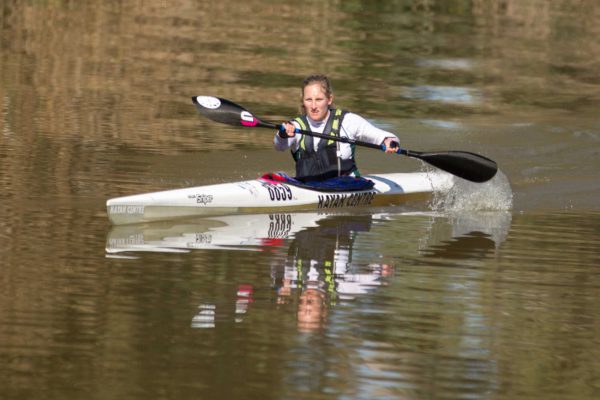 Following a slow start on the opening day Mac Squad’s Jenna Ward made a solid charge into second place in the women’s race after the second stage of the 2016 Berg River Canoe Marathon on Thursday. John Hishin/
Gameplan Media

McGregor’s major competition, Simon van Gysen and Adrian Boros, needed to make up some significant time on the second stage in order to put the 10-time champion under pressure however McGregor received a nasty gash on his forehead after he connected with a tree branch which threatened to derail his pursuit for an unprecedented eleventh title.

“That’s the Berg for you,” a diplomatic McGregor said. “I just didn’t duck and the tree got the better of me and I looked down and I could just see blood on my juice bottle so I knew it was going to hurt!

“A couple minutes later I could feel it throbbing and I drank blood for a while but I had to remember that I was still in a race and focus on what is in front of me and catch up to Simon (van Gysen) who had got away from me.”

Despite the drama of his head injury McGregor showed his class to claim another stage win and extend his overall lead following a concerted effort to drop international star and overall title threat Adrian Boros through the stage.

“Adrian tried his hardest to bridge the gap to myself and Simon on the front of the group but I managed to keep the pace on a stretch him but after I took the shot to the head Adrian was right behind us but I think he got caught up in the trees as well.

“I knew in the last few kilometres that I had to put the hammer down and I got a bit of a gap and I am happy with the result and another stage win,” the Euro Steel/Kayak Centre star added.

Van Gysen and McGregor spent the majority of the second stage together as they worked to keep the chasers at bay however the final few kilometres into the finish proved to be the difference between the two.

“I just didn’t have anything left coming into the finish and Hank really made it count. I was expecting it because I knew he was going to make a break towards the end because it was flat and I have seen it before but I couldn’t keep up,” van Gysen explained.

Hungarian ace Boros got a real taste of Western Cape paddling on Thursday when he was left frustrated after making some critical errors that upended his charge for a top two finish in Velddrif.

“There were about three or four occasions where I went the wrong way down a channel and had to turn back which cost me a lot of time.

“With about three kilometres to go my rudder was stuck out of the water and I could not shake it down which made the final stretch into the finish really difficult,” Boros explained.

Defending ladies champion Bianca Beavitt continued to drill holes into the chasing ladies’ charge as she continued her good form with another impressive all-round performance that saw her extend her overall lead to 24 minutes and 15 seconds over 2013 champion Jenna Ward.

“I think I made just as many mistakes today as I did yesterday to be honest!” Beavitt said after her stage victory.

“I was by myself for a lot of the day and was about 20 metres behind a group and just in front of another group a lot and I got rubbed off one group but I enjoyed the day and am happy with the lead that I have going into such a tough stage tomorrow.”

Mac Squad’s Jenna Ward was in good form during the second stage of the race as she raced back into the podium mix with a solid solo paddle on Thursday which took her from fourth to second in the ladies race.

“I’m feeling really good and I had a great day on the river today. I most of the day by myself but I enjoy that, it means that I can go at my own pace and concentrate on my race without any distractions.

“Tomorrow is going to be really tough but I am looking forward to what it has in store,” Ward said.

Third place in the women’s race was snapped up by Nicole Russell who shrugged off a few unfortunate swims during the second stage to finish alongside the young Kyeta Purchase who drops off the podium into fourth place.

Friday’s third stage of the Berg River Canoe Marathon is the longest with 75km from Bridgetown to Zoutkloof. More information can be found at www.berg.org.za