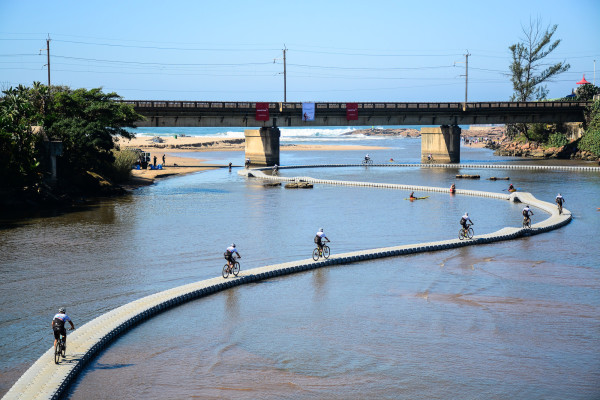 Riders had to negotiate their way along the winding floating bridge during the third and final stage of the Adventure at the 2016 KAP sani2c. Darren Goddard/
Gameplan Media

Jolivet Farm, Highflats – As Friday, 13 May dawned many of the top teams at the 2016 KAP sani2c would not have predicted what was about to happen as mistakes from both pairs of overnight leaders flung the title doors wide open with Team Telkom and Team Dorma Time Freight moving into the overall men’s and women’s pound seats respectively after the second stage from MacKenzie Club to Jolivet Farm.

With just over two minutes separating USN-Purefit’s Darren Lill and Waylon Woolcock in first and Team Telkom’s Johann Rabie and HB Kruger in second the race was very much on during the second stage of the race with the Scott LCB Factory Racing pair of Matthy Beukes and Gert Heyns joining the mix.

In what was a fairly innocuous crash, Darren Lill went down crossing a bridge however the entire group stopped in order for the USN-Purefit rider to dust himself off before the rest of the red-hot racing could continue.

Things did not pan out as hoped for the defending champions who were far from out of the woods as the pace of the race at the front lead to further mistakes and, subsequently, two potentially race-ending punctures.

“As we went into a technical section, I hit a rock and Darren hit the rock behind me,” Woolcock said at the Jolivet Farm. “He punctured but I totally trashed my front wheel beyond repair on the road and that was the end of the race for us – we had to limp home on a busted wheel.”

The visibly bashed up and disappointed duo’s stage two issues have seen them fall out of title contention while Team Telkom and SCOTT LCB Factory Racing are now neck and neck at the front of the race.

“We’ve managed to get ourselves into the lead so things went well for us today,” mentioned Rabie. “”sani2c is so fast and so it’s difficult to open up time on other teams so any lead going into the last day is a bonus!

“A lead of just over two minutes means the Scott guys will give us a good run tomorrow but we will try our best to stay in front.

“The last stage is very quick, which is something that will probably suit them (SCOTT) with their cross country skills, but I hope we will have a smooth run into the finish,” he added.

With the technicality of the descent into the uMkomaas Valley, Beukes and Heyns’ cross country backgrounds stood them in good stead and the latter fully understood that it was a day they would have to make a big move if they were to overcome their opening stage’s disappointment and break into the top three.

“Our plan was to go hard from the start today but we had a lot of work to do after yesterday and with it being such a long day, the gaps started getting quite big towards the end so it was a good day for us to try and put some time into the guys around us.

“Tomorrow is still going to be tough and to try and make up the gap to the Telkom guys will be difficult due to the fast nature of the stage but anything can happen, just like we saw today!” Heyns mentioned.

Team NAD Pro’s Gawie Combrinck and Nico Bell put in their second third placed performances in a row to secure the bottom step of the podium in the General Classifcation as well while William Simpson duo Derrin Smith and Timothy Hammond’s fourth placed effort on day two sees them into the top five overall, one place behind the disappointed Woolcock and Lill.

The lead during the day changed hands on a few occasions however a navigational mishap saw the Ascendis Health pair take a wrong turn and handed the Dorma Time Freight women the lead, which they accepted gratefully and powered home to the finish line 3:17 ahead of De Groot and Stenerhag to earn themselves a near-three minute lead going into stage three on Saturday.

“I said to Vera that we mustn’t give up, we must always chase to the line because you never know what could happen in mountain biking and I am glad that we did!” Neethling said afterwards.

“It was sad that it happened to them but this is mountain biking and it has happened to me many times as well.”

While the racing snakes of the Race enjoyed their second day in the saddle, riders of the Adventure made their way from Jolivet Farm down to the welcome sight of the finish line at Scottburgh’s Main Beach.

Despite a near-race ending tumble while descending into the uMkomaas Valley during Thursday’s second stage, the Nivea pair of Wynand van der Berg and Philip Beukes picked themselves up and dusted themselves off overnight to show the rest of the field a clean pair of cleats on Friday en route to their third consecutive stage victory and the 2016 KAP sani2c Adventure title.

Despite their strong showings on days two and three, Talon Tough Tools’ efforts weren’t quite enough to see them into second place overall though – AHS Racing’s Ashley and Alistair Haigh Smith’s consistency throughout the three days seeing them hang onto the second step of the Adventure’s podium with Halsey and Graham having to settle for third.

Saturday sees the 2016 KAP sani2c come to an exciting end as the Race heads into the final stage from Jolivet Farm to Scottburgh Main Beach. More information can be found at www.sani2c.co.za.