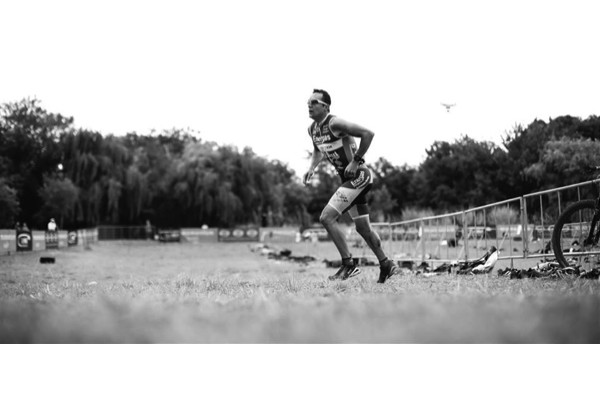 Du Plessis the first to exit the second transition

Brand du Plessis and Andrea Steyn secured back-to-back wins in the men and women’s categories respectively at Round 3 of the 2015 Momentum Health Oatwell DualX, powered by PeptoPro at Van Gaalen, near Hartebeespoort Dam at the weekend.

Du Plessis stormed to a dominant victory in the men’s race, clocking a time of 1 hour 33 minutes, 56 seconds for the 5km trail run, 30km mountain bike and 2.5km trail run. He was just over four minutes faster than runner-up, Bradley Weiss, with William Mokghopo rounding out the podium places a further minute back.

The women’s race was a much closer affair with Steyn’s winning time of 1:49:09 just 23 seconds faster than runner-up, Carla van Huysteen in the most compelling category battle of the day. Susan Sloan was third just under four minutes behind Van Huysteen.

“Great route and great weather. I trained hard for this bike leg because I knew it would be more technical and it worked out well for me,” said Du Plessis, who led the race from start to finish, confirming his dominance on the South African off-road duathlon circuit.

“Well done to Brand. The rest of us were never really close. He was gone on the first run. It’s great to see someone so confident in his abilities and that just allowed him to take control from the start. The altitude affected me, but no matter where we would have raced, Brand was in a different league today,” said Weiss.

“It was quite tough a race. I had about a minute-and-a-half lead over Carla after the first run but she caught me after about 20km on the bike. She got a gap and when I tried to close it, I hit a tree. My technical riding wasn’t strong today and I really had to run hard to catch up with her on the last run. It was a great battle,” said Steyn

“I really enjoyed the race today. My running is a bit off, but I am super happy with the bike leg. I managed to reel Andrea in gradually on the bike and I had the better of her in the technical bits. But she was just too quick on the run,” smiled Van Huysteen.

Both Du Plessis and Van Huysteen have now extended their respective leads in the 2015 Momentum Health Oatwell DualX, powered by PeptoPro Series.

Over 1000 participants tackled the various distances on routes that incorporated the stimulating riverside singletrack for which Van Gaalen is famous. The twisty trails cover constantly changing gradients with exposed tree roots, making it essential to stay focused on both the bike and run legs.

The 2015 Momentum Health Oatwell Series, powered by Pepto Pro will reach its conclusion on 28 November at Rhino Park, near Pretoria. To enter, or for more information, visit www.dualx.co.za.