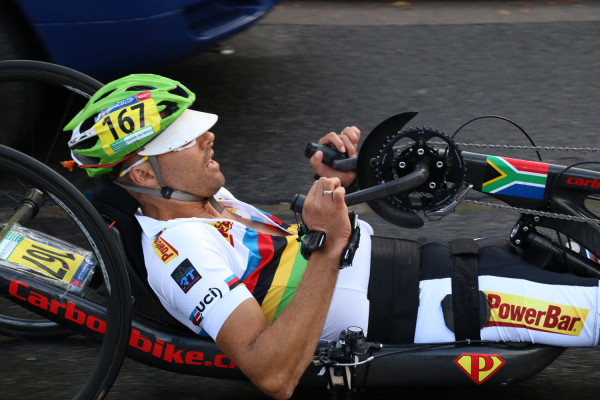 Para-athlete Pieter Du Preez rubbed shoulders with the best in the sporting business when he attended the 17th Laureus World Sports Awards in Berlin last month.

The 36-year-old, who was the only South African among the six nominees in his category, joined the likes of Usain Bolt and Lionel Messi at the awards function, which recognises remarkable sporting achievements.

The University of Johannesburg alumnus and actuarial analyst at Deloitte said it was an incredible experience.

“It’s been a real blessed last couple of years with lots of hard work involved. To represent my country at the awards was really special. ”

Du Preez said he was often seen as an inspiration by his peers, but to be recognised on the world stage was a huge honour.

“When I received the nomination, my friends and family were ecstatic – especially my wife. I had incredible support from the whole country.”

The only quadriplegic in history to have completed an Ironman triathlon won gold medals in the time-trial and road races in the H1 Class at the Para-Cycling world road championships in Switzerland last August.

Now a veteran of three Ironman events, the Randburg resident said it was a “journey every time”.

“For the level of function I have, it still surprises most people that I can do it. It’s very special to be the first to do something as it can never be taken away from you.”

Du Preez’s life changed when he was involved in a cycling accident during his honours year at UJ.

“A car hit me and left me a C6 quadriplegic, which means I can only move my wrists, biceps, neck and shoulders. UJ were incredibly supportive and still are.”

He has not let anything get in the way of his success and planned to raise the bar even higher.

“I have achieved a lot, but there is always more. Getting to Rio is on my list – as is medalling there.”

The marathon world record, some track world records and a sub 12-hour Ironman were other big goals, he said.

The Wings for Life World Run ambassador said he trained anything from two to five hours per day and seven days a week.

“It depends on what event is up next. For the Ironman, it has gone up to 35 hours a week.

“The hardest and most important part is recovering,” said Du Preez, who works three-quarter days.

When it comes to motivation, he said he focused on inspiration.

“We all have the power to inspire. A simple smile at the supermarket or telling someone ‘good job’ at work can change that person’s day.

“I inspire, sure, but my supporters telling me how I’m inspiring motivates me more than I think I do them,” said Du Preez.

“Remember, when a bad thing happens, it’s an opportunity to be great.”