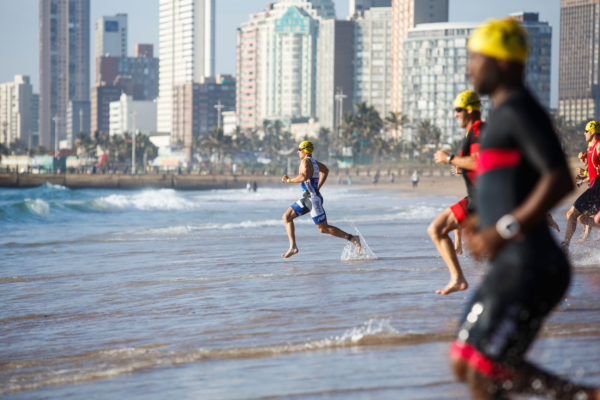 The famous Durban beachfront will provide the backdrop to the 2018 MiWay Durban Ultra Triathlon which will take place on Sunday, 4 March 2018. Kevin Sawyer/
Gameplan Media

Durban – With the resurgent growth in interest in triathlon racing, Durban’s beachfront will host the cream of the country’s triathletes alongside enthusiastic social athletes for the MiWay Durban Ultra Triathlon on Sunday 4 March 2018.

Building on the well supported 2017 event, the event has opted to move its centre of operations entirely to the Durban beachfront, a change from the finish area being staged at Moses Mabhida Stadium this year.

“The change is intended to make it more convenient for the athletes as well as their seconds, supporters, family members and spectators,” said event director Damian Bradley.

“This is an event that has a rich South African legacy, and we are centering it around the participants and the privilege of being able to race on the Durban beachfront.

“With the event doubling as the SA Long Course Triathlon Championships, this will give fans a great chance to follow the elite competitors by having the race focus in one area,” he added.

“This is what we are calling the ‘Hot Zone’ where spectators can watch the swim exit, the bike start, the bike finish, the run laps and finish all in one spot,” he said. The ‘Hot Zone’ will offer a wide variety of food and drink options for spectators and their families.”

“As much as triathlon racing has grown and evolved, we want to build on Durban beachfront’s special legacy in the sport,” said Bradley.

The limited entries for both the full Ultra Triathlon and the shorter Sprint race opened today (Wednesday 25 October), with the fields capped at 800 and 800 athletes respectively. There is a 10% discount available to the first 100 entries.

The event forms part of the four leg Ultra Triathlon series that celebrates its tenth anniversary in 2018.

“It is an entirely South African owned, born and bred series,” said Bradley. “From its start ten years ago, with one event and 200 athletes, it has grown to a national series of four events and over 5000 competitors,” he said.