Dusi gives back to the Player Foundation

Pietermaritzburg – Following the most successful Dusi Canoe Marathon charity batch auction to date, the over R320 000 raised has subsequently been split between the race’s three beneficiaries with the Magqubu Ntombela Memorial Fund and the Dr Ian Player Memorial Fund receiving a combined R131 878 to help with a number of projects.

The two funds are set to become one under the banner of the Ntombela Player Memorial Fund in the near future where the focus will be on sustainability of the environment, a passion of both Ntombela and Player, and a number of these projects will benefit from the Dusi’s donation.

The 2015 Dusi Canoe Marathon was dedicated to the late Dr Ian Player following his death in November 2014 while the charity batch was also named in his honour with the funds’ representative Todani Moyo grateful for the generous donation that the race made.

“On behalf of the Magqubu Ntombela Memorial Foundation and the Dr Ian Player foundation I would like to thank the Dusi Canoe Marathon for their generous donation,” he said. “The funds that you have gratefully donated here today will be used to contribute to a number of projects that we are currently involved in.”

Player always mentioned the importance of preserving the environment for future generations and with the current rate of poaching, the numbers of rhinos in the wild is decreasing rapidly.

Through the Dusi’s donation, the Ntombela Player Memorial Fund is now able to pump much needed funds into the protection of these animals.

“The funds will support our Rhino anti-poaching programme through which we have decided to be pro-active instead of re-active to make sure that this massacre of our rhinos is stopped for the betterment of the future for our children.

“The money will also be used for the anti-mining campaign that opposes the current mining of pristine areas particularly around Umfolozi. It will be also be used to contribute to community trails in conjunction with the Wilderness Leadership School and Ezemvelo KZN. 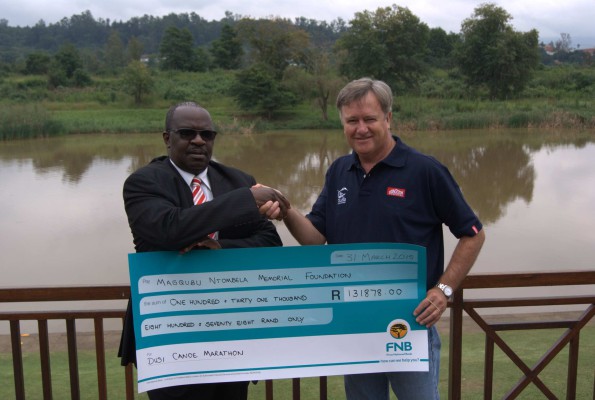 “Magqubu Ntombela, when he was still alive, used to say that it is imperative to save the wilderness and to give everyone the same experience that he had with his great friend Ian (Player),” Moyo added.

General Manager of the Dusi Canoe Marathon Brett Austin Smith was quick to point out Dr Player’s impact on the race having been one of six to take on the challenge for the very first time in 1951, and the only one to finish, as well as his importance to the future of our environment through the legacy that he has created.

“The Dusi Canoe Marathon and the paddling community is very proud to support a cause that was so close to Dr Ian Player. We are totally indebted to Dr Player for creating the Dusi, and for having the foresight and tenacity to create the great event.

“Supporting his foundation is our small contribution to preserving his great legacy,” Austin Smith mentioned.

Austin Smith understands the importance of the Foundation’s work and he speaks for the paddling community when he adds the urgency of the support needed for the new Ntombela Player Memorial Foundation.

“As outdoor lovers, we are also determined to preserve the Rhino population, and support wholeheartedly the initiatives of the Ntombela Player Memorial Foundation.

“We hope the contribution from Dusi paddlers will help in these endeavours,” Austin Smith explained.